by Eric Seeger
Prev NEXT
10 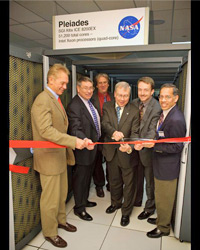 Do you know what one of these technological marvels is really capable of? NASA's Advanced Supercomputing (NAS) division at Ames Research Center is happy to explain. After all, Pleiades is the supercomputer behind some of the coolest extraterrestrial computing projects around.

Astronomers on NASA's Kepler Science Operations Center are using Pleiades to search images of the galaxy for other Earth-like planets. Thanks to Pleiades, the team discovered a planet that orbits two stars, called a circumbinary planet, in 2011. A few months later, they discovered more multistar planets, establishing a whole new class of planetary systems [source: Dunbar].

And when Pleiades wasn't busy finding new star systems or revealing the forces that make hurricanes work, it was running simulations to understand how galaxies formed after the big bang. Yes, the SGI system can run the math required to calculate entire galaxies, thanks to its 1.24-petaflop performance [source: Dunbar].

See kids, that's how you supercompute. It's all about thinking big -- sometimes astronomically big.