by Eric Seeger
Prev NEXT
9 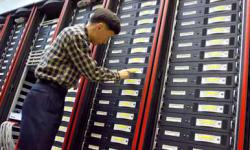 While the people who work with high-performance computers will tend to say that the machines exist to further science, the fact remains that being a player in the supercomputer field offers a certain level of status to the host country. No other national program exemplifies this better than China.

Like almost everything else that's big in China today, if you roll the calendar back only a few years, you'll find no trace of the National Supercomputing Center in Shenzhen. Along with its sister facility in Tianjin (see No. 5), Shenzhen's Nebulae computer blasted onto the scene in 2010 at the No. 2 spot with no previous history in the field. The sudden arrival of a 1.27-petaflop computer in China was a game changer for long-established labs in other parts of the world. In the early 2000s, the Chinese wanted to become a dominant force in this field, and about a decade later they'd effectively gone from zero to hero.

Nebulae (made by Chinese vendor Dawning) arguably hasn't been breaking much ground since its debut. Funding shoulders part of the blame. Since local governments footed much of the bill for the computer (which cost more than $1 billion), they got a large say in which projects Nebulae will work on. The system was originally intended to hash out calculations for astrophysicists, but it has actually spent much of its time developing local economic projects such as aerospace industry advancements, improved weather forecasting and even developing animated films [source: Davis]. It's humbling work for one of the world's top supercomputers – sort of like hiring Stephen Hawking on a research retainer but making him tutor your teenager in algebra.