by Eric Seeger
Prev NEXT
3 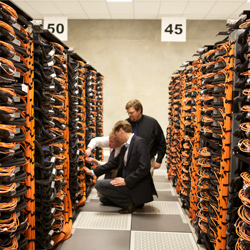 Spoiler alert! Two of the top three spots on this list are from the United States Department of Energy (DOE). Researchers at the No. 1 spot are virtually blowing stuff up for the U.S. nuclear program, while the crew at Argonne National Laboratory is quietly working away on its science experiments. Sort of.

Argonne was the first national science and engineering computer lab in the United States, opening in 1946 and using its first computer in 1953. So many of the last century's great technological advances came by way of Argonne's labs, including nuclear reactor technology, nuclear submarine technology and research on subatomic particles.

In 2012, Argonne's 8.16 petaflops of supercomputing power was used to advance many different fields of scientific research, ranging from biosciences to transportation and climate research. Want to find out if your city's proposed suspension bridge will come crashing down in high winds? Argonne folks can simulate all the forces involved. After that, they can give you the latest climate change prediction data.

Another great part of Argonne's computing program? It's open to so many researchers outside of the DOE. Researchers apply for time on Argonne's system, and they're awarded a set number of hours on the system. Think of it as a highly elevated form of helping a nation with its science homework.