by Gerlinda Grimes
Prev NEXT
6 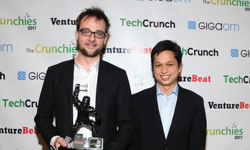 The co-founders of Pinterest (two of which are shown here), founded Pinterest "to connect everyone in the world through the 'things' they find interesting."
Araya Diaz/Getty Images Entertainment

After being stymied when I tried to "Pin" Pinback and thwarted when I attempted to upload my writing, I started wondering what all the Pinterest hype was about. What was the point of collecting a bunch of images on virtual bulletin boards? Sure, it looks kind of cool, but what exactly is the point of Pinterest?

The first thing to remember is that when you pin stuff to Pinterest, you aren't only pinning images of the bands, recipes, restaurants, authors, typography, architecture, fashion and other stuff that you love. You're also collecting links to that stuff. Like coupons in a junk drawer or snapshots in a scrapbook, you're gathering all your favorite links into one handy place.

The genius of this became clear to me at a recent dinner party. I was trying to remember the name of this awesome cartoon blog that makes me literally laugh out loud when I suddenly remembered I'd pinned the site to my "things that make me smile" board on Pinterest. After a few clicks on my phone, "Hyperbole and a Half" was right at my fingertips. Not only did I have access to the image I'd pinned, I also had access to the original link.

And speaking of original links, there's some basic etiquette you'll want to follow as you're getting started on Pinterest. Learn the guidelines for proper Pinterest pinning next!