3-D PC glasses are designed to convince your brain that you are seeing a real, three-dimensional object.
Photo courtesy Amazon.com

Only a few years ago, seeing in 3-D meant peering through a pair of red-and-blue glasses, or trying not to go cross-eyed in front of a page of fuzzy dots. It was great at the time, but 3-D technology has moved on. Scientists know more about how our vision works than ever before, and our computers are more powerful than ever before -- most of us have sophisticated components in our computer that are dedicated to producing realistic graphics. Put those two things together, and you'll see how 3-D graphics have really begun to take off.

Most computer users are familiar with 3-D games. Back in the '90s, computer enthusiasts were stunned by the game Castle Wolfenstein 3D, which took place in a maze-like castle. It may have been constructed from blocky tiles, but the castle existed in three dimensions -- you could move forward and backward, or hold down the appropriate key and see your viewpoint spin through 360 degrees. Back then, it was revolutionary and quite amazing. Nowadays, gamers enjoy ever more complicated graphics -- smooth, three-dimensional environments complete with realistic lighting and complex simulations of real-life physics grace our screens. But that's the problem -- the screen. The game itself may be in three dimensions, and the player may be able to look wherever he wants with complete freedom, but at the end of the day the picture is displayed on a computer monitor...and that's a flat surface.

That's where PC 3-D glasses come in. They're designed to convince your brain that your monitor is showing a real, three-dimensional object. In order to understand quite how this works, we need to know what sort of work our brain does with the information our eyes give it. Once we know about that, we'll be able to understand just how 3-D glasses do their job. 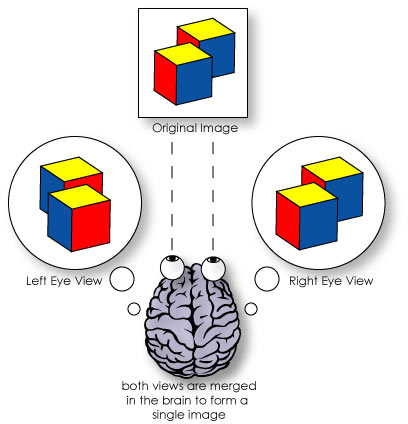 Human beings, like most other creatures, are equipped with two eyes, situated close together and side by side. This positioning means that each eye has a view of the same area from a slightly different angle. You can check this out by focusing on a distant object and viewing through each eye alternately -- see how some things seem to change position slightly?

The brain takes the information from each eye and unites them into one picture, interpreting the slight differences between each view as depth. This produces a three-dimensional picture: one with height, width and depth.

It is the added perception of depth that makes 3-D, or stereoscopic, vision so important. With stereoscopic vision, we see exactly where our surroundings are in relation to our own bodies, usually with considerable precision. We are particularly good at spotting objects that are moving toward or away from us, and the positioning of our eyes means we can see partially around solid objects without needing to move our heads. It's easy to see why some people believe stereoscopic vision evolved as a means of survival.

Certainly, stereoscopic vision is vital for seemingly simple actions such as throwing, catching or hitting a ball, driving or parking a car, or even just threading a needle. That's not to say such tasks can't be managed without 3-D vision, but a lack of depth perception can make these everyday tasks much more complex.

A Different Point Of View

The key to stereoscopic vision is depth, and our brain will happily take care of that for us, providing our eyes are given the right information in the first place. This is exactly how those red-and-blue glasses work -- each color filters out part of the image, giving each eye a slightly different view. The brain puts the two different images together, and those blue-and-red blurry images turned into a fantastic 3-D comic, or movie, or TV show.

Stereograms, also known as Magic Eye pictures, use seemingly-random patterns of dots but rely on the viewer to cross his eyes in just the right way, or to look through the image until the eyes see just the right part and allow the brain to decode the hidden depth information.

Both methods have their disadvantages, of course -- the red-and-blue glasses make it difficult to show color in the 3-D image, and viewing stereograms is an art in itself. Neither method is entirely suitable for playing games.

Nevertheless, the underlying principle is exactly the same: creating and controlling those two different points of view. But just how easy is it to create these two separate images, one for each eye?

Nowadays, games designers sit down with a 3-D graphics package and design their dinosaur in three dimensions. Once that's done, they needn't worry about the different views -- the computer has a 3-D model of the dinosaur in its memory, and the game simply works out where the player is looking and draws the correct view of the dinosaur using the 3-D model. In fact, everything you see on your screen in a modern 3-D game is produced the same way; the game is like a gigantic 3-D model. The computer works out what it needs to display on your screen and generates the appropriate view.

Since the computer is quite happy to create one point of view, there's no problem shifting the viewpoint slightly and creating another point of view. And after that, all you need is a way to get the correct image to the correct eye.

It's all down to the power of liquid crystal displays, or LCD. Just like the liquid crystal in a watch can be changed from transparent to black, the lenses of PC 3-D glasses can be transparent or opaque. In other words, the glasses can control which eye sees the image on the screen, and with careful timing you've got perfect 3-D. Here's how it happens:

Two images are generated, representing the views seen by each eye:

Both of these views are presented on the screen in rapid sequence:

All of this happens so quickly that the brain is entirely unaware of the two images merging together into a stereoscopic view. This is the same thing as when we watch a film using an old film projector and the sequence of still images flickering onto the screen merges together to form a movie.

A Brief History Of 3-D Glasses

So, we've seen that although there might be something complex going on behind the scenes, with the right equipment we can just sit back and let our eyes do the work. Of course, the technology wasn't always so simple; there have, in fact, been four generations leading up to today's 3-D glasses.

The first generation modified the games themselves to make them compatible with stereoscopic 3-D. The games' creators had to specifically support each type of LCD glasses -- hardly an ideal situation. There was no guarantee that the glasses you'd bought would work with your favorite game. As you can imagine, that didn't appeal to many people; so a second solution was developed.

This second solution was to override the game, actually taking over the computer's screen and altering what was displayed. As far as the game was concerned, it was just doing what it normally did, except, of course, that some of the computer's time was taken up processing the image to make it 3-D. The result was slower performance and low-resolution, blocky images. It did work with hundreds of games, though, and that was a definite improvement.

The third generation worked in a similar way, modifying the graphics driver but also maintaining the resolution of the images -- no more blocky graphics! Unfortunately, it wasn't compatible with many games, though it was a definite forerunner to the 3-D glasses we have nowadays.

In the fourth-generation models, compatibility is high, the complicated work is done by the graphics card, and the lightweight LCD glasses flick so rapidly between the two images that all we see is crystal-clear, 3-D images.

So what's on the market? What should you look for? Let's find out... 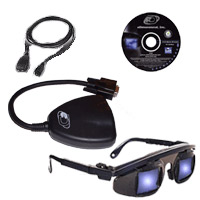 Although the basic technology is the same, there is a range of different glasses out there. You'll find lightweight, wireless glasses, as well as more basic (and therefore cheaper) pairs. The view through the glasses depends more on your computer's graphics card than the make of glasses, but you will find that different manufacturers offer extra software or other minor incentives. The lesson is: Shop around! If you get the chance to try a pair out before buying, don't hesitate -- try to imagine wearing them for an hour of intensive gaming. You might want to put in the extra money for a slightly better model.

Bear in mind, too, that all glasses come with the standard video game warning concerning epilepsy, eye-strain and tiredness. If you generally find it difficult to cope with a standard flat monitor, you will definitely want to try out the glasses before you buy. Be wary also if you have an LCD flat-panel monitor, because current 3-D glasses don't work well with this kind of monitor. Be sure to check compatibility before you buy.

Check out exactly which kind of video card you have (manufacturer and model) and do a little bit of research before you make your purchase. The X-Force 3D Game Glasses, for example, will only work with nVidia video cards. Many glasses will work with various graphics cards, but the only way to tell for sure is to read the side of the box carefully.

For lots more information on PC 3-D glasses and related topics, check out the links on the next page.