Browse the article The Battle Looms Over Net Neutrality 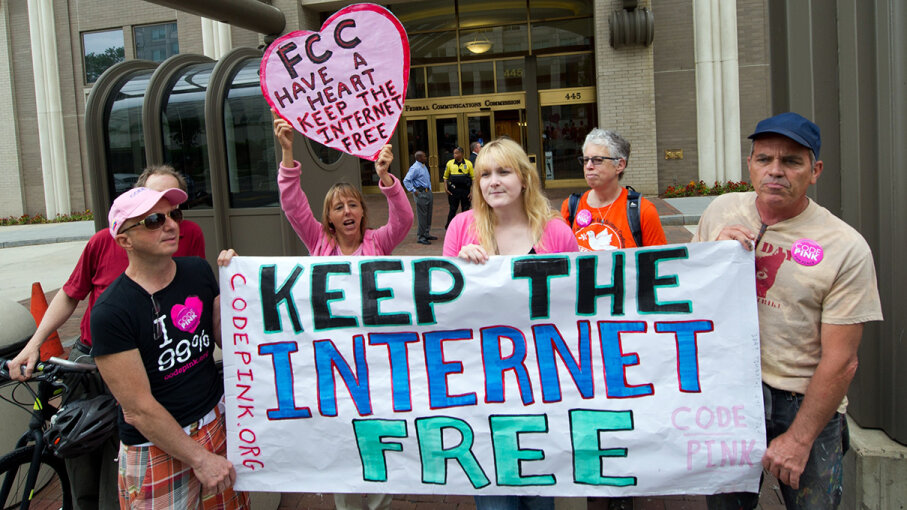 The fate of what is known as net neutrality lies now, for the most part, in the hands of the five members of the Federal Communications Commission. And if you listen to the thrashing of glassy-eyed internet junkies everywhere, that is bad, bad news.

Net neutrality? Few in the internet sphere — which is to say, pretty much everybody on the planet — are neutral when it comes to net neutrality.

On one side, you have the heaviest users of the internet, along with thousands of small businesses and — strangely enough — many of the web's content behemoths, like Google, Apple, Facebook, Twitter and Netflix. All are proponents of open, unfettered access to the internet and believe the current rules, hammered out by the FCC in 2015 under the direction of former President Barack Obama, are good and necessary.

On the other side, you have the companies that provide the broadband pathways to get all that content. They are the internet service providers (ISPs), especially the big ones like Comcast, Time Warner, Verizon and AT&T. They say the current rules stifle growth and are heavy-handed.

These days the FCC, with Donald Trump now president, is siding with the ISPs. And it's widely expected that, on Dec. 14, the five-person FCC panel will vote 3-2 — along party lines, with three Republicans — to roll back net neutrality regulations.

What Is Net Neutrality?

Before we go any further, let's first define net neutrality. It sounds like something too nebulous and theoretical to be at the center of the potential demise of the internet as we know it. But the concept is not out-there at all.

"Broadly, I would say, [net neutrality] is the freedom to go wherever you want on the internet, use whatever service you want, and the internet service provider can't interfere with that," says Ernesto Falcon, a legislative council at the Electronic Frontier Foundation, a nonprofit that is dedicated to defending digital civil liberties. One of Falcon's focuses is on open internet issues.

"As a legal matter, the ISP industry are considered 'common carriers,'" Falcon explains. "What that means is, they're required by law to operate in a non-discriminatory way in providing their communication platform. They can't block a website, they can't throttle or slow down access to websites in order to extract extra rent and they are not allowed to engage in any sort of exclusive deals with other internet companies to prioritize one set of traffic over another."

The proponents of net neutrality fear that, without the current laws, that's exactly what the big ISPs will be able to do: control the flow of content. And that could have all sorts of consequences, including limiting competition and the flow of free speech.

"As an economist, I know that when you have less competition, you see less innovation to benefit consumers and you also see higher costs for consumers," says Roberto Angulo, CEO and co-founder of AfterCollege.com, a career network for college students and recent graduates. AfterCollege was one of hundreds of smaller companies that sent a letter to FCC Chairman Ajit Pai in April urging him to keep the regulations governing net neutrality.

Instead, earlier in November, Pai — a Trump appointee — declared his intention to strike down the existing Obama-era rules ensuring net neutrality in a statement he called the "Restoring Internet Freedom Order." Pai says the current rules "depressed investment in building and expanding broadband networks and deterred innovation."

His statement didn't even make it out of the FCC offices before it was blasted. FCC Commissioner Jessica Rosenworcel, that same day, called Pai's order a "plan to roll back internet rights," and said in a statement, "This is ridiculous and offensive to the millions of Americans who use the Internet every day."

More from Rosenworcel: "Our internet economy is the envy of the world because it is open to all. This proposal tears at the foundation of that openness. It hands broadband providers the power to decide what voices to amplify, which sites we can visit, what connections we can make and what communities we create. It throttles access, stalls opportunity and censors content. It would be a big blunder for a slim majority of the FCC to approve these rules and saddle every internet user with the cruel consequences."

FCC Chair Pai has called the Obama-era regulations "heavy-handed," a "mistake" and a "failed approach." He wants the federal government to "stop micromanaging the Internet," and will instead just ask ISPs to be "transparent."

All that, on its face, is very attractive to a lot of people. After all, who wants Big Government all up in their business?

"Government regulation usually gets in the way of business, and lifting regulations tends to be a good thing," AfterCollege's Angulo says in an email. But, he also points out that basic regulations are always useful "and relying on the goodwill of for-profit companies is usually not enough."

Without regulations, the arguments go, the little guys in the internet world will get squashed. If, for an example, Comcast is allowed to charge $1 million a month for an extremely speedy connection, Netflix (with its 100 million subscribers worldwide) could fork that over without blinking. A Silicon Valley startup that provides content couldn't, though, would be relegated to slow speeds nobody wants.

Even if that Silicon Valley startup has some kick-butt programming, without an audience, that innovative program — and probably that startup — is going to die on the vine.

The arguments for at least some basic government intervention go beyond mere business concerns. Proponents say that internet access should be considered (as it is under current regulations) a public utility, like water and electricity. "Information is not a 'nice to' have. It's a 'must' have these days," Angulo says.

A free and open internet, many argue, is critical to freedom of expression, too. An internet with only a few big gatekeepers, and no government regulation, is a positively dystopian vision to some.

The FCC vote is scheduled for Dec. 14. Already, Pai and those who want the net neutrality rules stricken know they're in for a scrap.

Republican Sen. Susan Collins of Maine apparently became the first GOP lawmaker to break ranks when she told the Bangor Daily News in late November that she was against the idea of internet providers being able to act in an uncompetitive way to the detriment of consumers.

Fellow Democratic FCC commissioner Mignon Clyburn has ripped Pai's proposal, saying it "undoes the light-touch, court-approved Title II classification of broadband Internet access service that was modeled on the wildly successful approach to mobile voice, and returns to an unregulated approach where broadband providers reign supreme and customers with complaints have no redress at the FCC."

The FCC's Rosenworcel has called for public hearings before any vote. Hundreds of companies have already signed an open letter to Pai, which was made public Nov. 27, to voice their displeasure at his plan.

And earlier this year, the FCC fielded some 22 million comments from individuals on the net neutrality debate, though most were form letters and many were considered fraudulent. Still, at least one data scientist determined that some 99 percent of the real responses were for keeping the net neutrality rules in place. Many other sites, including battleforthenet.com, are soliciting calls to Congress now.

Protests are even scheduled at Verizon stores across the country on Dec. 7. (Pai, a figure disliked by many in this debate, is a former Verizon lawyer. Verizon is calling for an end to net neutrality.)

None of this may make a difference when Pai and his commissioners meet to vote on Dec. 15. But, even if the FCC votes to overturn net neutrality, as expected, the ruling is likely to be challenged in court, Falcon says.

Like the internet itself, the concept of net neutrality will be hard to keep down.

Now That's Interesting
To enforce the current rules, in 2015 the FCC re-classified broadband — the way most users access the internet — as a utility-like "common carrier" service under Title II of the Communications Act of 1934. (It was previously classified as an "information service.") Pai proposes to strip that designation, removing the FCC's oversight and ceding the policing of any disputes on internet shenanigans to the Federal Trade Commission.