Browse the article What happens to your discarded old computer? 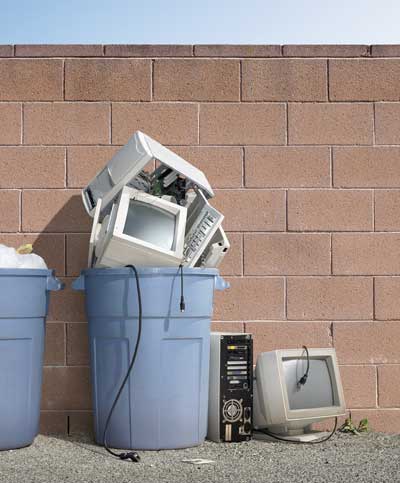 You traded in that cumbersome, old monitor for a swanky new flat screen. But where does the old monitor end up? See our collection of computer hardware pictures.
Stephen Swintek/Stone/Getty Images

Remember how good it felt the last time you hauled your clunky, old computer and monitor out to the curb and went back inside to turn on your shiny, new PC? Well as it turns out, that quick trip to the trash wasn't the best idea you ever had.

A growing number of advocacy groups are working to educate the public on what happens to their discarded, old computers and why they may want to take more precautions when disposing them. What many of us don't realize is that our electronics and other household electrical gadgets are potential Molotov cocktails, filled with unsavory heavy metals and toxic chemicals.

Before we talk about the dangers, let's first examine how ubiquitous these types of products have become in the U.S. and around the world. Americans own billions of electronic products, including 200 million computers [source: Downing].

With high technology turnover and obsolescence rates, in the next five years, about a billion computers around the world will be discarded [source: Ladou]. And how quickly are we discarding computers in the U.S.? The Environmental Protection Agency ­estimates 20 million computers were thrown out in 1998. By 2005, that number had more than doubled, with estimates at 130,000 computers being discarded daily [source: EPA]. In addition to computers, Americans toss out millions of cell phones and TVs each year. On the other side of the pond, Europeans discard about 6.5 million tons of household electronic items each year [source: WEEE Man Project].

The technical term for all this high-tech garbage is e-waste. It refers to products like TVs and computers (including keyboards, monitors, ­mouses, printers, scanners and other accessories). E-waste also includes cell phones, DVD players, video cameras and answering machines. The term refers to any products that use electricity, like refrigerators, toasters, lamps, toys, power drills, and pacemakers. For simplicity's sake, this article will refer to all of these devices as electronics. For a more in-depth look at e-waste and what it involves, read How E-waste Works.

We'll examine what lies underneath the outer casing of your discarded computer and other e-waste, and why you should care what happens to it after you give it the big heave-ho. 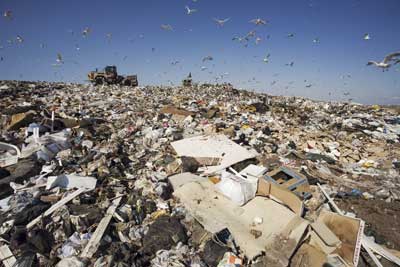 So where do these electronic relics go to retire? Between 2003 and 2005, as much as 85 percent of the disposed electronics in the U.S. went straight in the trash and headed directly to local landfills or incinerators [source: EPA]. Worldwide, as much as 50 million tons of old electronics are discarded annually [source: Carroll].

Some of you may be thinking, "So what? All my other garbage goes to the landfill, why not my old computer?" But let's think back to what we touched on briefly on the previous page -- the potentially lethal chemical combination that could seriously harm the environment if not properly handled.

The dangers of discarded, old computers stem from what's inside them. Your typical piece of electronic equipment -- especially one like a PC with many circuit boards -- may contain up to 8 pounds (3.6 kilograms) of lead, along with lower levels of mercury, arsenic, cadmium, beryllium and other toxic chemicals [source: Downing]. These elements are all toxic at varying exposure levels. There is also a fairly poisonous family of flame-retardant chemicals used in most electronics. Find out how lead affects the body by reading Why do CRTs contain lead?

Many of the aforementioned hazardous chemicals and toxic substances are known to cause health problems -- and in some cases death -- when exposure occurs in large doses. Less is known about the dangers of exposure in small doses over a long period of time, like elevated levels of toxic chemicals in the water supply or inhalation of chemicals by factory workers. It's safe to assume the effects aren't good.

As you may imagine, landfills are a particularly harsh hotbed for pollutants. In the U.S., e-waste accounts for approximately 4 percent of the total amount of trash, but it contributes about 40 percent of the lead content in landfills. Of the other heavy metals in landfills, e-waste accounts for about 70 percent of that pollution [source: Downing]. While most landfills are strategically located in an attempt to contain potential soil and water contamination, having this much hazardous waste on the ground may be cause for concern.

There is an even darker side as to what might await your discarded, old PC. In the U.S., even if you made a well-intentioned effort to properly recycle your computer, there's a 50 to 80 percent chance that your computer didn't end up where you thought it would [source: Ladou].­ Continue to the next page to learn more about your ex-computer's potential world tour. 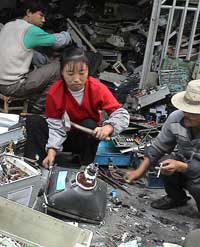 This woman in Guiyu, China, was about to smash the cathode ray tube off a computer monitor to retrieve the copper-laden yoke. The lead-laden glass is a hazard, and toxic phosphor dust coats the inside of the monitor.
Photo courtesy Basel Action Network 2001

Recycling old computers can be accomplished when people follow proper, valid channels. When the recycling trend is on the upswing, the market inevitably starts to respond. Manufacturers are taking back some old electronics from customers and recycling or refurbishing them. In certain instances, companies are improving their products so they contain fewer toxins to begin with. Some companies are doing this voluntarily; others are being forced by government regulations. Legitimate e-waste recycling centers with on-site facilities are also springing up in various cities.

But the sad reality is that for years -- and even to this day -- many so-called recycling operations are simply collection points. Collected electronic devices and parts are sold to scrap brokers, who ship this cargo to developing nations for deconstruction.

So why bother transporting e-waste? Why not recycle it right where it is? Like many aspects of the global economy, the cost of shipping e-waste is more than made up for by the cheap labor available at its destination. Recycling electronics in developing nations (including China, India, Pakistan, Ghana, Nigeria and Ivory Coast)­ is achieved at a fraction of what it would cost in developed countries. Part of the savings also stems from the fact that occupational and environmental laws tend to be weaker in those regions.

Once the e-waste arrives in these economically challenged regions, laborers earn their incomes by recycling these old computers, TVs and cell phones for their core components. And the process is ugly.

In some communities, the young, the old and everyone in between dismantle e-waste every day. Laborers smash and unhinge devices, spraying toxic shrapnel all over the ground, where people with no shoes walk. Then workers employ a variety of methods to track down and remove the metals from objects like circuit boards, semiconductors and wires.

Fire can burn away the flame-retardant cocoons that cradle copper wiring, releasing soot and smoke into the air. Fire also melts the metal off circuit boards and other electronic organs. This allows workers to harvest gold, lead, copper and other materials from the burned plastic husks.

Another method is an acid bath. Soaking the circuit boards in powerful solutions of nitric and hydrochloric acids (highly corrosive to human tissue in strong concentrations) can free the metals from their etched electronic pathways. This process is often done by hand. After that, the recovered resources are sold and re-enter the manufacturing cycle.

The acid, hazardous waste and worthless byproducts are often burned or find their way into local water sources, often by outright dumping. Tests performed on the air and soil that surrounds large recycling operations show a high level of pollution. Researchers are studying how this e-waste recycling affects the local populations. Preliminary reports are expected to show negative results.

Now you have a better idea of the sad journey your computer may have taken after it left the warmth and security of your home office. Continue to the next page for great links about how you can properly dispose of your next outdated, broken computer.

What Goes Around, Comes Around

Many developed nations seem to operate on the "out-of-sight, out-of-mind" principle, but their e-waste excesses could be coming back to haunt them. Researchers think products like the recent surge of lead-loaded jewelry from China are indications we'll see a turnaround in the trade flow of toxins. The jewelry was especially suspicious because it also contained copper and tin, suggesting the producers derived the alloy from recycled circuit boards [source: Carroll].