Browse the article What was the first portable computer? 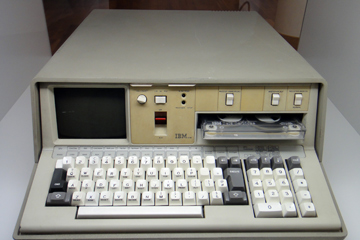 I don't currently have a desktop computer. I use a laptop to write because it's so convenient -- I can use it anywhere in the house (or at the library, or at a coffee shop). I think most people these days have laptops or use devices like tablets or smartphones to do a lot of things that we used to do on our desktop computers.

I'm not suggesting that desktops are going away anytime soon; they're still preferable in a lot of situations. But today when you need something portable, there's no shortage of options. Back in the earliest days of personal computing ... not so much. But portable computers have been around since the mid-1970s -- depending on what you mean by "portable."

There are laptops on the market (sometimes known as ultraportables) that weigh around 2 pounds, but the computer widely thought of as the first portable weighed in at nearly 53 pounds. You wouldn't have wanted it on your lap, but that wasn't the idea. In 1973, IBM designed a prototype computer called SCAMP, which stood for Special Computer APL Machine Portable. (APL is a programming language that has since been replaced by A+.)

Two years later, it released what is often considered the 5100. The IBM 5100 was a single unit with a 5-inch CRT display, a keyboard, a 200K tape drive for storage and a processor. You could get it with up to 64KB of RAM, and either APL or BASIC (another programming language) operating systems, or both. The 16KB RAM model with just APL sold for $8,975, while the 64K model with both operating systems hit at $19,975. Pricey by today's standards, and that was in 1975. But you might have guessed that the 5100 wasn't built for fun; IBM intended the computer to be used by scientists and programmers. There wasn't much else available at the time in terms of a personal computer (it was all about the mainframe), and nothing that was as powerful in such a "small" and portable package.

Despite these achievements, the hefty price tag made it a tough sell, and you couldn't really upgrade it. So maybe we should reassess the term "portable." Portable computers still exist -- they're too big to be called laptops and plug in instead of relying on battery power, but they're far easier to transport than a desktop. But when you first saw this question, you were probably thinking of a laptop. Read on to learn about the first one of those. 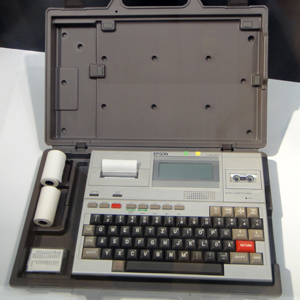 When researching this article, it was interesting to see how passionate some people can be about older computers. Many models are still in use by enthusiasts. You can still buy the printer ribbon and other accessories for the Epson HX-20, and I came across a person who still writes programs meant to be used on it. The earliest laptop I can remember using was my father's and it was supplied by his employer for work. He sometimes brought it home so I could play the first "Sim City" on it, and this was around 1990. I wish I could remember the model, but I do recall that it was impressively small compared to the computers I was using at school!