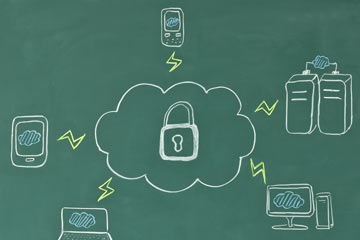 Can you put a padlock around the cloud?
iStockphoto/Thinkstock

Dreamers aren't the only ones with their heads in the clouds anymore. Whether it's a business calendar, banking information or pictures from Junior's bar mitzvah, more and more of the information, documentation and other stuff we access every day is stored up among those puffy white swaths of cotton in the sky, figuratively speaking. Many of us just don't seem to know it. In a recent poll, more than 50 percent of respondents said they hardly or never used cloud computing services. Yet, 95 percent said they regularly used Facebook, Gmail, GoogleDocs, all of which are popular cloud-based networks [source: Citrix].

Generally, the "cloud" refers to any network used to store, access and share data using internet-connected devices. Consider, for example, the way many of us look at photos. You take a shot with digital camera, download it to your laptop and then upload it to your favorite photo hosting site, such as Flickr. Once the photo is up, you can then access it with other internet-connected devices like a cell phone, tablet, or even those relics of our recent, plugged-in past, the desktop computer. This is the cloud.

There are two types of cloud networks: public, which covers all the information you share with the world in a cloud service offered to everyone, like Facebook; and private, a unique network developed by the user or a cloud service provider, such as Amazon's Virtual Private Cloud, concerning the stuff you keep to yourself, or perhaps share with some friends. Like miniature versions of Facebook and Tumblr, groups of users will eventually be able to form their own social networks with their own privacy settings [source: Tadjer].

The cloud computing model allows users to access just about all the data (and other stuff) they could possibly need with a couple of key strokes. Or less. Experts say that predictive technology will ultimately give devices the power to foresee where you are going and the cloud-stored stuff you might want to access when you get there [source: Tadjer].

That sounds useful. Also a little creepy. So is the cloud safe? Read on to find out.

When it comes to important documents, sensitive data and other materials that we probably wouldn't want the entire world seeing, people like to at least feel like they have a certain amount of control. Lock boxes, Cayman Islands bank accounts, Dick Cheney's human-sized safe, all of these are designed to not only keep certain things away from prying eyes, but also to give the owner a certain amount of comfort in knowing that it will take at least some dynamite and a blow torch for anyone to get their filthy mitts on it.

So it's no surprise that security is one of the biggest concerns associated with cloud computing. By moving to the cloud, people and businesses give up control of both their information and the way in which it is protected [source: Farrar].

There are two major types of security threats involved in cloud computing: password vulnerability and en-route exposure. Because cloud services are internet-based, access to them (like e-mail and social media accounts) is typically protected by a password. The password is the key to your data. A hacker who gets his hands on it also gets his hands on any data the password is protecting [source: Kantra].

Personal data is also susceptible to threats on the way to the cloud. In other words, your stuff is like an electronic version of Little Red Riding Hood, traversing a perilous path from device to cloud. Wild wolves are all around, frothing at the mouth at the prospect of intercepting the data along the way [source: Farrar].

That said, every data storage system faces its own security threats. An external hard drive, for example, is susceptible to physical damage, whether by flood, fire or theft. If the hard drive happens to be stored near your computer, it's possible that both the drive and the computer are damaged at the same time, meaning that Great American Novel you've been chipping away at all these years is now gone. In the event of a cloud service failure, on the other hand, the user still has the original data on a PC [source: Kantra].

With these issues in mind, users can take some basic precautions to limit their vulnerability.

Before you ride the cloud, it's important to know who you're surfing with. Choose a company with a good reputation for both physical and network security. Many of the internet -based storage providers (HP, IBM, etc.) have established track records. The big ones also focus primarily on business services and come with a heftier price tag. For personal cloud services, your options are mostly among lesser known service providers. Fortunately, many provide quality, affordable service. With prices below $100 a year, Pogoplug, for instance, offers three well reviewed private cloud service plans with up to 1 TB of storage space and allowing for up to seven users [sources: Farrar, Pogoplug].

Peter Piper picked a peck of pickled peppers. Cloud users should pick a good password. Several good passwords. While it's much easier to just go with one for all internet sites, doing so makes hackers' jobs easier: all they have to do is get one password for access to all of your information. For the accounts that are most important, like banking, be sure to come up with unique passwords [source: Greenfield].

Users can also throw hackers off of their scent by establishing different login names for various accounts. Hackers generally look for username-password combos, rather than various email addresses using the same password. Even if you only have one email address, you can use variations of it for user name/login purposes. Gmail and other electronic mail providers allow users to link variations of their email address. For example, a person whose email address is YourName@gmail.com can also use YourName+LinkedIn@gmail.com and YourName+Twitter@gmail.com in order to login in to cloud-based sites [source: Greenfield].

Finally, many cloud service providers cloak data en route to the cloud by encrypting files on a user's computer or device before uploading it and sending the data to the cloud using what is called a secure socket layer (SSL) Internet connection. The files remain encrypted, requiring a key to unscramble them. Most cloud service providers use their own keys and unlock the data whenever the user needs it. Some allow users to select their own keys [source: Spector].

Check out the links on the following page for more information on life in the cloud.

Unlike banks and physical security companies, whose performance can be tracked over a period of time, storing data in the clouds is a relatively new phenomenon, and there is no standard measure of ranking operators. In fact, an expert told CNN, "A company or an individual looking to move to the cloud is going to have to make a huge leap of faith that their data is being protected" [source: Farrar].

I'm currently typing this author's note on my iPhone. I will later retrieve it in the "notes" section of my Gmail account , which I will access using my laptop. Unfortunately, my laptop is at home, but I am not. That means I won't be able to add this note to the Word document draft of the article you just read until I get home. At that point, of course, the article will be "late." Had I stored it in GoogleDocs, I could have simply added this note to the article immediately and sent to my editor in a timely fashion. Apparently, I still have a few things to learn about the cloud.