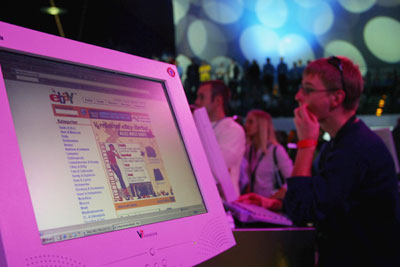 An Ebay buyer checks on the progress of his bid at an eBay Live event on September 27, 2003 in Berlin, Germany. Are there any laws that protect his information?
Kurt Vinion/Getty Images

The network of trade is infinitely vast, and countless bits of information zip around the Internet each day. Millions of transactions are made on Web sites like Amazon.com and eBay.com. For an idea of how often people use technology to complete purchases and trade goods, credit card company Visa processes about 6,800 transactions per second during the holiday season [source: Information Week]. That's not just ATM withdrawals -- it's also purchases made at physical retail locations and purchases made over the Internet. All of it has to be passed across a complex network of bits and bytes and stored into company databases around the world.

Because of the increased risks of identity theft and other crimes involving personal data on the Internet, many laws cover consumer security. Crimes like identity fraud are continually on the rise, and the Federal Trade Commission (FTC) estimated that more than 9 million Americans have their identities compromised each year [source: FTC]. The threat only grows with incremental improvements in technology.

In the United States, legislation varies from one state to the next, but most are designed to protect the same sorts of information. For example, the Information Security Breach and Notification Act, passed in New York in 2005, and SB 1386, passed in California in 2003, are meant to give consumers speedy notification of any security breach that might involve the seizure of personal information [source: Ars Technica].

This personal information usually includes your name and address, along with at least a Social Security number, a driver's license number or any kind of account number, credit or debit card number and its necessary PIN or password. The reason these kinds of laws exist, according to the lawyers behind them, is that once companies notify their customers of potential security breaches, people will quickly be on guard to watch out for any suspicious activity on credit reports or anything else that can be tracked electronically.

There are also programs that make it difficult for Internet bots, software applications that run automated processes and act like humans, to gather information or infect other computers with viruses. When purchasing goods online, you may have come across what's called a CAPTCHA (Completely Automated Turing Test To Tell Computers and Humans Apart). They're usually small text boxes that contain wavy, randomly distorted text -- computers aren't able to "read" the words, but people can.

Although the Internet has created great economic growth, many challenges remain to make sure people have a safe and secure place to buy and sell goods. For lots more information on technology and trade, see the next page.