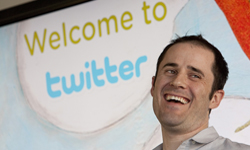 Twitter and "tweets" may be new words in the pop-lexicon, but if you aren't sure what they mean, you're behind the times. Twitter is a social networking service provider. Unlike popular social networking Web sites like Facebook and MySpace, Twitter is a very basic concept. On Facebook and MySpace, users can create detailed Web pages complete with videos, images and lots of information (some might say too much). Twitter relies mainly on cell phone texting services to send out messages not longer than 140 characters to anyone who is in your network of contacts. These messages are called tweets, and tweeting is the verb that's been born out of the act of sending a message via Twitter. In order to give or receive a tweet, you need a Twitter account. Got all that?

Despite Twitter's basic approach to messaging, it has become wildly popular. In 2008 and into 2009, celebrities have gotten on the Twitter train and use the service to stay in touch with fans, give updates on daily activities to anyone who "follows" their tweets and instantly comment on rumors without going through the press. Once the celebrity has a nice following of fans, those fans then hit the Internet and before you know it, millions of people are in the know about anything a celebrity wants to reveal. Britney ate pancakes for breakfast, ya'll. Ashton thinks the weather in New York is boss. Shaquille is telling people to "Shhhhhh" during halftime of an NBA game.

It may be a flash in the pan; no one can tell at this point. But for now, celebrities have embraced Twitter -- even President Barack Obama and Queen Elizabeth are tweeting. On the following pages are the top five celebrities on Twitter, as of April 2009. Of course, these stats are out of date by the time they're typed onto the page, but such is life in the fast moving world of Twitter. 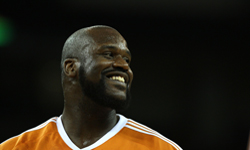 Shaq is a giant on the court and in the world of Twitter.
Jed Jacobsohn/Getty Images

NBA superstar center Shaquille O'Neal of the Phoenix Suns is a larger than life character. He's well-known for not only being one of the most dominant players in NBA history, but for being a lovable goofball, with fans all over the world. So it should come as no surprise that O'Neal has more than 743,000 people following his tweets [source: Twitter]. Considering that "Shaq" joined Twitter in December 2008 and has sent out more than 1,100 tweets as of April 2009, there's plenty fans can learn about the towering cutup. Unfortunately, due to Twitter's character limit, you won't find any deep musings from Shaq. His tweets range from the lightly inspirational, "Never celebrate until the task is complete, almost aint good enuff," to the mundane, "I'm n san fran, on my way to Alcatraz, I mite say." When it comes to text messaging and tweet language, a healthy dose of (sic) is required.

Shaq made headlines by twittering a cryptic "Shhhhh" during halftime of a game against the Washington Wizards in March 2009. Another NBA player named Charlie Villanueva posted a halftime tweet about playing better in the second half the week before Shaq did, but didn't get the attention that megastar O'Neal did. Aside from odd messages with interesting spelling choices, Shaq also uses Twitter to give tickets away to fans. 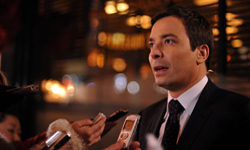 Jimmy Fallon has big shoes to fill replacing Conan O'Brien. He should twitter about it.
Bryan Bedder/Getty Images

Comedic actor Jimmy Fallon first gained fame as a regular on the iconic NBC late-night television sketch comedy show "Saturday Night Live" (SNL). After SNL, Fallon acted in various movies for a few years before replacing "Late Night" host Conan O'Brien on NBC. Conan had taken over the spot for David Letterman in 1993, so Fallon is in good company with his new gig. Starting a TV show takes a lot of time and effort, and Fallon has been good about keeping fans in the know as the show was being crafted and through its launch in March 2009.

Fallon joined the Twitter nation in September 2008 and has sent nearly 1,000 tweets as of April 2009 [source: Twitterholic]. Fallon keeps fans in the know in his day-to-day life as the host of a popular late night show -- "Just got 4 deli platters from The Daily Show for me and the staff. Classy peeps. Thanks!" Fallon uses Twitter as a way to get fans to watch his show. His 765,000-plus followers are reminded about guests Fallon thinks are cool and worth tuning in for [source: Twitter]. 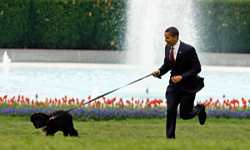 Too much tweeting could land President Obama in the dog house with Bo.
Chip Somodevilla/Getty Images

American President Barack Obama has made history in more than one way. He became the first African-American to hold the highest office in the United States by defeating John McCain in November 2008, and he became the first President to actively use the Internet and social networking Web sites in his campaign. After the election, most people probably thought that President Obama's days of social networking were over. That all changed on March 26, 2009, when Obama sent a tweet about answering questions about the economy. The message included a link to the White House Web site where a video of President Obama urged Americans to write in with economic questions that he would try to answer the following day.

President Obama was much more active during his campaign, and since he took office he hasn't done a lot of twittering. He has his hands full trying to right a sinking American economy. That doesn't stop people from signing up to follow him, though. In April 2009, the President had nearly 1 million followers on Twitter [source: Twitter]. During his campaign, he (or more likely an aide) twittered almost daily about where the campaign was traveling or other helpful links. No one can tell whether his embrace of social media made a difference in the election, but it's a great way to make sure people stay connected. On Nov. 5, soon-to-be President Obama twittered, "We just made history. All of this happened because you gave your time, talent and passion. All of this happened because of you. Thanks." 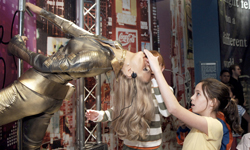 A young fan is startled to find that wax Britney is not breathing - LOL!
Jemal Countess/Getty Images

Not many celebrities have captured the public eye quite like Britney Spears, the young American singer from Louisiana. From her highs as an award-winning singer playing sold-out shows to her lows as a suspect mother going through a very messy public divorce and breakdown, Spears knows how to get attention. Britney is a bit of an anomaly in the world of Twitter. She joined in October 2008 and only posted about 120 messages over the next seven months [source: twitterholic]. That aside, she has more than one million and rapidly counting followers as of April 2009 [source: Twitter].

Like most other celebrity users, Britney uses the service to send information and messages of thanks to her fans, as well as using it to give away concert tickets. And like most other users, it's a quick and welcome way to instantly clear up any rumors flying around cyberspace. Britney's manager handles some of the business tweets with links to concert photos and updates on which celebrities attended her show that night. But it's clear when Spears is the one behind the wheel -- "Playing Slip N' Slide with the boys. SOOO CUTE!!!!" and "Went to the movies with the dancers tonight. We saw I Love You, Man. S0000 funny!" The zeroes in the second example are all Brit. No word on whether Spears' cell phone keyboard is covered in Cheetos dust. 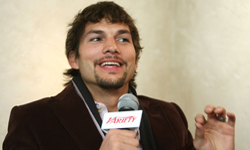 "No dude - OVER a million followers. Can you even comprehend that?"
Kristian Dowling/Getty Images

There can be only one to rule them all and in Twitterland, it's The Kutch. Actor Ashton Kutcher, best known for TV's "That 70s Show" and for being married to actress Demi Moore, is the undisputed king of Twitter. Kutcher was the first person to gain 1 million followers, and as of April 21, 2009, his Twitter fan base was nearly 1.3 million strong [source: Twitter]. Kutcher has really embraced Twitter, leading to an odd turn when the actor challenged cable TV news giant CNN to a race for 1 million followers in April 2009. Kutcher won by about 30 minutes, and as promised, he donated 10,000 mosquito nets to the charity Malaria No More in the form of a $100,000 check [source: The Guardian].

So what makes Kutcher so appealing to Twitter users? One reason might be his tweet frequency -- more than 1,600 updates [source: Twitter]. Another may be his high-profile romance with wife Moore. Hollywood power couples tend to attract a lot of attention, and with Kutcher posting links to pictures of his wife's backside, he's surely gained some male followers. He also has a nice female following because of his heartthrob status. And then there's the very public bet with CNN. Kutcher has done a lot of promotion of his Twitter account, so people probably want to know what all the fuss is about. If you choose to follow his tweets, you can expect everything from words of wisdom and inspiration to the mundane -- something that doesn't distinguish him from his celebrity counterparts that can only look at him from a distant second place. All hale The Kutch, twittering his way into the history books.

Here are some samples of Kutch tweets: