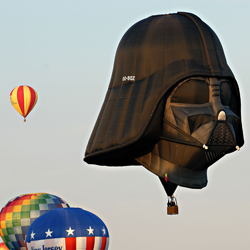 Darth Vader may not be a real person, but that didn't stop someone from creating a fake Twitter account for the dark overlord of the "Star Wars" film franchise. As it turns out, Twitter users are always up for a laugh, whether the twitterer is a real person or not -- the Darth Vader account had more than 70,000 followers in April 2009 [source: Twitter]. Creating an account for a fictional character is a good opportunity for fans of the character to breathe some comedic life into their persona. No word yet on what Star Wars creator George Lucas thinks about Vader's tweets. Let's hope he gets the joke, and that the account stays active. Darth Vader may not have had much of a sense of humor in the Star Wars movies, but his Twitter updates are chock full of hilarity.

Here's what the all-powerful Sith Lord is up to: