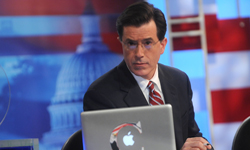 Comedian Stephen Colbert has made a career in comedy with a subtle sense of humor that can only be described as deadpan. Not only does Colbert rarely crack a smile on his Comedy Central television show "The Colbert Report," but he typically delivers his unique brand of political commentary with a deadly serious, stern look on his face. Many people who don't follow the show can't tell if the host is serious or not, but make no mistake, Colbert is always joking. After getting his start as a field "reporter" on buddy John Stewart's "The Daily Show," Colbert landed his own show in 2005. The show has proved to be popular with viewers and critics alike. In 2008, "The Colbert Report" won an Emmy award for Outstanding Writing for a Variety, Music or Comedy Program [source: IMDB.com].

There are several fake Colbert accounts on Twitter, but the original has gained the most followers (more than 190,000) and is the most true to Colbert's deadpan comedy stylings [source: Twitter].

Here are some funny, but fake, tweets from the Colbert imposter: