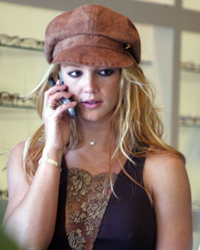 Britney Spears is a popular singer who got her start after appearing on the television talent show "Star Search." Since then, Spears has gone on to sell more than 60 million albums worldwide to become one of the top female singing acts of all time [source: telegraph.co.uk]. Spears is just one of the many celebrities that have used Twitter to message out information to her fan base. She's also one of the more popular Twitter users to freely admit that she uses ghost Twitterers. In fact, Spears goes so far as to have her ghost writers indicate that they wrote it at the end of each tweet. This way fans have an idea when her manager might be posting something and when it's the real deal. As for whether or not her "real" messages are in fact being keyed in by Spears herself, there's really no way of knowing. But at the very least, her assistants are being told what to say by the pop queen.