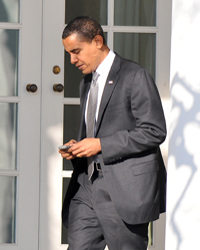 American President Barack Obama made history by becoming the first African-American to hold the highest office in the United States by defeating John McCain in November 2008. While on the campaign trail, Obama's staff used many social networking Web sites to get information out to his supporters. Obama is a new President for a new generation of connected Americans and he's embraced the technology along with them. In April 2009, the President's Twitter account was in the process of being migrated over to a more general White House Twitter account. Here, Americans can get information that the White House feels is important to message out, like links to newsworthy articles that the public should be aware of. As of now, the Twitter account is ghostwritten, but don't be surprised if President Obama logs on from time to time with some of his trademark words of inspiration.