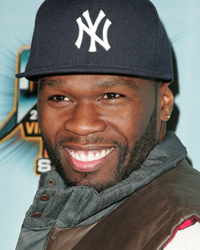 Rapper 50 Cent, aka Curtis Jackson III, made headlines in March 2009 when it was revealed that he was not the man behind his Twitter account. Like many other celebrities, Jackson's Twitter account was created and operated under the guise that it was him doing the writing. When the director of his Web presence came out with the words "He doesn't actually use Twitter, but the energy of it is all him," it created more of an uproar than was expected. Chris Romero, aka Broadway, is the man behind the man, at least as far as Twitter is concerned. Like most celebrities, the posts are chock full of bite-sized publicity and marketing information, so it shouldn't come as a surprise that the actor and rapper wasn't the one behind the keys. But Jackson, and our number four entry Hugh Jackman, were the first celebrities to try and pass themselves off as Twitterers before being exposed.