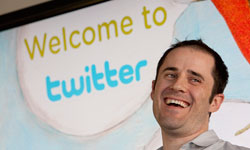 To twitter is to talk in a chattering fashion. Not a bad description for the muted jibber-jabber exchanged on the social networking Web site of same name. From their cell phones and laptops, users of Twitter type up autobiographical tidbits, or tweets, that are then displayed on their profile pages at the Web site. Tweets are fenced in by one rule -- they cannot be longer than 140 characters. Followers subscribe to users' streams of tweets, which they can read via the Internet, a cell phone or through an instant messaging client. Some users choose to leave their Twitter accounts open so that anyone can see them, which is the default setting. Other users restrict access to only their real-life friends and acquaintances.

If you're already chirping away or if you're considering opening an account, you might want to read these five tips on how to get the most out of Twitter's social network.