How to Use Social Networking for Your Business 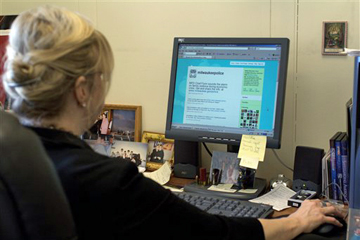 Have you ever wondered why you never received so much as a phone interview when you thought for sure you were qualified enough to at least garner a call? Before you question yourself too much, check out your MySpace and Facebook pages. Believe it or not, businesses use your personalized social networking Web pages to gauge whether or not to pursue you as a viable employee candidate. Like it or not, companies will pull out all the stops in order to hire good employees, and businesses will make hiring decisions based on impression. If you have photos all over your online profile depicting you as a social butterfly, drinks in hand, chances are a prospective employer will close your page and file your resume in the trash can.

Searching for a job can be a job in itself. The Internet is a great tool for job hunting, but it has also made competing for a job much more challenging. Twenty years ago, motivated job seekers would use face-to-face tactics and personal communication skills to gain an upper edge on the competition. But the Internet forces you to use different tactics. To even get yourself noticed, you now have to send out scannable resumes with catchy keywords as companies use computer programs to sort through qualified candidates at a mind-boggling pace. You simply have to dig deeper to find job opportunities and networking is more important than ever. In fact, online social networking has become a popular outlet for job opportunities.

Social networking can also help businesses to grow. With 250 million people on Facebook and as many as two-thirds of all Internet users delving into social networking, businesses have found a relatively untapped medium for increasing the bottom line [source: McCarthy]. Some companies have created MySpace and Facebook pages in attempt to reach as many potential customers as possible. Dell, for instance, has an extensive Facebook page which includes its Social Media for Small Business social network. In other instances, users can become fans of companies on Facebook, or can join various networks affiliated with different businesses.

Along with creating social networking pages, companies continue to add community sections or other areas where visitors can participate in blogging on their Web sites. Blogging is an effective way for users to communicate and the end result is often a growth in Internet traffic. Blogging can even lead to permanent employment. Some companies have found talent through the blogging world and hired writers such as Jay Busbee, a NASCAR blogger who edits the "In The Marbles" blog for Yahoo Sports.

Media outlets are also using social networking to aid in the assimilation of breaking news stories. Twitter has proved to be an exceptional source for breaking news. In January, a Twitter user was the first to report the US Airways jet liner that crash landed in the Hudson River in New York. The Jakarta bombings in Indonesia first crossed the newswire thanks to Twitter and word of Michael Jackson's sudden death in June 2009 swept across the Internet, thanks to the microblogging service.

Now more than ever before, businesses rely on the World Wide Web. With the sheer number of Internet users who participate in social networking, it only makes sense for companies to jump on board and embrace the social networking revolution. You, too, can use social networking to get ahead in your career or small business. Just remember, it's not just your friends who are looking at your page.

For more information on social networking, make connections to the articles found on the next page.

George Orwell's surreal novel 1984 depicted a totalitarian world full of void of privacy. It was a dark look at what society could become if humanity gave up its right of free thinking. Social networking sites, while benign in nature and meant to bring people from around the world together, have been an avenue to self destruction for many people. Companies in the private sector, especially in states like Georgia that have the right to hire and fire employees at will, have done just that based on photos and information found on Facebook and MySpace. In North Carolina, a school employee was fired in 2008 for material on his social networking account. Along with a written post that contained offensive language, the employee had uploaded provocative photos of women to his page.

The material, while perfectly legal, was posted for all to see, including school officials, and led to the employee's dismissal. Similar posts have led to suspensions and recommendations for firings around Charlotte, N.C. Unlike verbal communication, posts on social networking sites are in writing and easy for everyone to access. As proven by Twitter, word spreads fast. Perhaps this type of virtual policing is what Orwell was afraid of? Whatever the case, the message is simple: You better watch what you say on your social networking pages. It could cost you your job.

How imeem Works
How Delicious Works
How CarDomain Works