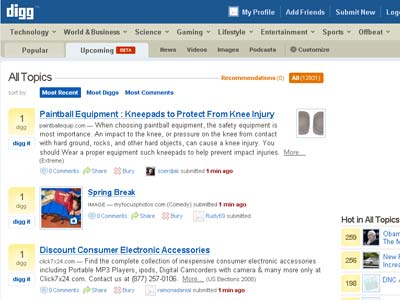 The Upcoming stories view shows you the most recent submissions to Digg.
(HSW Screenshot, no credit)

It started small and quiet. Macgyver, a frequent submitter to ForeverGeek and to Digg, discovered a strange thing on Digg -- two stories submitted by the same user with nearly identical Diggers in nearly identical Digging order got promoted to the front page, and one of the Diggers for each story happened to be Kevin Rose. While Macgyver drew no conclusions, the obvious one to draw was that Digg had missed an instance of auto-Digging. The added strangeness of Kevin Rose being one of the Diggers is more difficult to explain, and Macyger left it at that. He posted his observation on the ForeverGeek blog.

In a somewhat strange move, a ForeverGeek reader (not Macgyver) submitted the blog story to Digg. The next thing they knew, the story was un-Diggable (effectively buried) and the ForeverGeek URL was banned -- users could no longer submit ForeverGeek stories. The buried story soon disappeared from the site entirely.

You can adjust settings on your profile to create a customized view when you log in to Digg.
(HSW Screenshot, no credit)

­Macgyver followed up with a blog post titled "Digg Corrupted: Editor's Playground, not User-Driven Website," and the story spread quickly. In the official Digg blog, Kevin Rose posted a response to the controversy, essentially stating that there was nothing funny going on. He said that he Diggs stories he finds interesting, and if auto-Digging was occurring in that instance, he didn't know about it. ForeverGeek was banned, he said, because it was breaking Digg policies against spamming and fraudulent accounts.

Macgyver didn't let it go, calling Rose's response a "(non)response" and continuing to question the very premise of the Web site -- its lack of editorial control -- in a running account of the event on ForeverGeek. Soon and without explanation, ForeverGeek was unbanned from Digg.com, free to submit at will.

This little unresolved episode aside, Digg seems to be doing just fine in terms of traffic and funding, and it has plans. The latest version of Digg includes new categories encompassing all types of news, not just science and technology, as well as a "Top Digg Users" feature that lets you check out the activities of the most active (and therefore influential) people using the Digg Web site. This type of tracking makes it easy to discover people you'd like to add to your friends list so you can keep up with their Digging activities.

For more information on Digg.com and related topics, check out the links below.