Browse the article How EasyNews Works 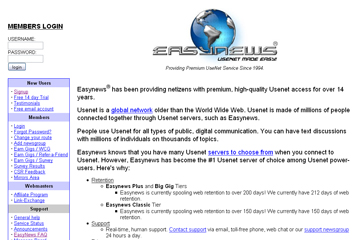 Long before the World Wide Web in its current form even existed, people found other ways to communicate over the Internet. These days, with social networking and Internet forums, networking Web sites and online communities such as Facebook and MySpace gaining so much popularity, the Internet has truly revolutionized the way people communicate. But the predecessor to those Internet forums is a technology created in 1979 by two Duke University graduate students. Jim Ellis and Tom Truscott conceived a way to link computers to share information like articles or posts over a network using the UNIX-to-UNIX copy protocol (UUCP). Eventually, newsgroups were shared on larger networks and would become so numerous that they had to be categorized. Social networking over the Internet was born. The first foray into social networking was called USENET -- short for User's Network [source: Encyclopedia Britannica].

Despite its age and relative lack of flashy technology, USENET is still in wide use. And while you can probably access USENET though your Internet service provider, your ISP may impose restrictions upon how much traffic you send over that server. As a result, some serious USENET users opt for paid services that offer unlimited USENET access. One of the most popular of these is EasyNews.

Developed in 1994, EasyNews is a vehicle for accessing USENET newsgroups, both on an NNTP server and over the Web. But what makes it different than using your ISP's NNTP service? In the next section, we'll look at how EasyNews and USENET work together. From there, we'll talk about what you can expect with EasyNews and everything will make sense when the benefits are broken down in the third section.

At its inception, accessing USENET was only possible through a dedicated client that used UNIX-to-UNIX copy protocol, or UUCP. Later refinements allowed access to newsgroups via network news transfer protocol, or NNTP, but connecting to USENET using either method means you have to use a program with newsreader capability. As the Web browser takes on more responsibilities, people are finding other ways to provide access to USENET newsgroups.

Think of it like this: There are many ways to make a phone call. One person may use a plain old telephone service (POTS) landline while another may use voice over Internet protocol (VoIP). Another may use a cell phone. All of these methods will establish a connection between you and the other party.

For the uninitiated, USENET newsgroups are similar to Web-based social networking forums found on social networking sites. Newsgroups are essentially discussion groups where users from all over the world can share their insight. Newsgroups usually come in text form with attachments encoded as binary files which require newsreader software to read them. What EasyNews does is provide a powerful and seamless way for users to access the millions of topics and discussions using a Web browser. If you prefer, however, you can use a newsreader program with EasyNews's NNTP server itself.

EasyNews is in competition with Internet service providers and other premium news services. Like any business providing customers a service, EasyNews has to make its services appealing and distinct. In the next section, you'll see some of those features as well as learn about what makes a USENET premium server what it is. 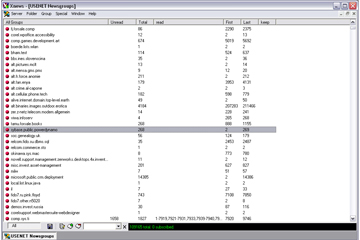 USENET's been around a while and isn't as flashy as newer Internet social networking tools.
Screenshot by HowStuffWorks.com

Capacity refers to the maximum amount of bandwidth users are allowed at each tier, which EasyNews refers to in gigs. Each EasyNews user account has a gig bank -- an account of the amount of bandwidth he or she has used. In a way, gigs are like currency that EasyNews members use to download content from the various newsgroups on USENET. As members use up their gigs, the gig bank displays how much is left. EasyNews lets members roll their unused bandwith over month to month, and users can replenish their gig banks to each tier's maximum in one of four ways. The easiest way is by purchasing more bandwidth. In addition to buying more gigs, users can earn free gigs by taking surveys, referring friends to EasyNews or participating in the World Community Grid project, a charity in which people donate their computers' unused computing time to help crunch data. The work is applied to medical research, feeding the hungry and other projects.

Like e-mail, USENET posts can have attachments, and many serious USENET subscribers want to be able to access those files, too. In fact, posts in newsgroups can contain so much binary information that they may be too large and actually have to be removed from the server because the data simply take up too much room. This is where binary retention comes into play. Essentially, this is the amount of time a server will store a post in a certain newsgroup before it can't be accessed anymore. All USENET providers have to choose how long to provide access to those files. People subscribe to premium services such as EasyNews because it extends the length of time members can access newsgroup postings.

Unfortunately, services like these come at a price. But if you're into USENET, you've undoubtedly experienced some of the shortcomings of standard news servers found on ISPs. If that's the case, a premium news server may be worth the money to you. As a rule of thumb, there are certain things you should look for when choosing a premium news server. In the next section you'll learn what those are.

It's been said a good news server must excel in three areas: speed, completion rate and retention. Speed is a big deal when it comes to downloading binary content from USENET. Because ISPs are concerned with network throughput, some providers throttle bandwidth for their users and put caps on the amount of traffic that can be downloaded from their NNTP servers.

EasyNews provides another avenue of access that lets its members get around their ISPs' restrictions. In a way, the company is functioning as a sort of ISP itself -- EasyNews is connected directly to the Internet backbone using four providers: Level 3, GBLX, Highwinds Network and Deutsche Telekom. In fact, the company provides a route selector feature to help members choose the fastest USENET connection.

Serious USENET users are also concerned with a provider's binary completion rate. Attachments to USENET posts are binary files and disrupted downloads frustrate users. EasyNews boasts a 98 percent completion rate, which means that 98 percent of the packets reach the end user without a problem. This is especially important, since the broadband revolution has made USENET a popular venue for distributing files -- which was considerably more difficult in the days of dial-up modems. EasyNews's HTTP service provides access to binary groups only, while its NNTP server offers access to other groups, too [source: EasyNews].

Retention is another area serious users consider when choosing a USENET provider. If you recall, retention is the amount of time in which posts and attached files hang around before they're dropped from the USENET server. EasyNews offers more retention time with each paid tier. Account options range from 150 to 200 days. This is comparable to similar premium news servers. There is a difference in the amount of time articles are kept available on EasyNews's NNTP and HTTP servers, however -- because more groups are available on the NNTP server, retention time for these groups is reduced [source: EasyNews].

For more information about social networking, please take a look at the links on the next page.