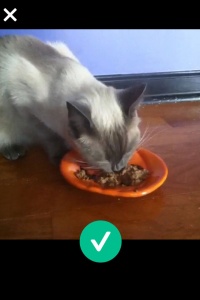 Once you've recorded your vine, you can review and approve it before posting.
Screen shot by HowStuffWorks staff

You may wonder how Vine's founders came up with the six-second time constraint. The answer is that it took some experimentation. They wanted a short and sweet video app, and they initially attempted to make Vine work at lengths of five, nine and 10 seconds, but none of those seemed just right.

Five seconds wasn't quite long enough for average users to convey an idea without it being anticlimactic. But six seconds, or more precisely, six and a half seconds (the exact length of a Vine) provided just enough punch to make Vine potent [source: NPR].

After you finish shooting that six-second epic, there's still the matter of what to do with it, exactly.

Finish your recording and then add a caption describing your video. Wrap things up by including hashtags (just like Twitter) so that people can search and sort videos by topics.

Hashtags, of course, are those funny-looking addendums on so much content that appears on the Web these days. They're denoted by the pound sign preceding them. For instance, if your video is about dogs, you could add hashtags such as #dogs, #puppies, or #puppiesrock or any other word combinations you can dream up.

Then you can post your video to Vine and your followers will see a notification that you've released a new work of art, such as a clip of your dog puking up fresh, green grass.

The latest version of Vine lets you protect posts, which means that only your followers can see your clips. You must approve a user's request to follow your posts. This gives you some semblance of control over how widely your clips will be seen ... but fair warning, this is the Internet, where no content is ever totally private.