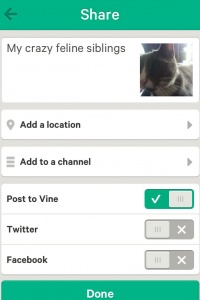 Ready to upload your six-second work of art? Just add your caption and any additional information you want included, and Internet fame is surely right around the corner!
Screen shot by HowStuffWorks staff

Once your video is uploaded, you can share your Vine on Twitter, Facebook or just about any social networking app you choose. Sharing, of course, is the whole point of Vine. Unlike some social networking apps, though, there's no way to keep your Vines private. Sure, you have to approve your followers but it's best to assume that everything is public. Keep that in mind to avoid sharing parts of your life (or your person) that you'd rather keep private.

You can delete Vine posts, but sometimes it takes a few minutes for the post to disappear. The video will still be saved on your mobile device, though, in the .MOV file format so you can still share it later from your media archive or camera roll if you want to.

From a technical standpoint, it's possible to import videos from other sources into Vine and then post them. That means you could potentially create videos with special effects and pro-style post-production and then upload them to Vine. But this takes a bit of technical savvy and for average users, there's no real point in going to the hassle of doing so. The best way to get the most out of Vine is to simply use it as intended -- to shoot and share roughly made videos.

Of course, the simplicity part isn't always as simple as it should be. There are some common user complaints about Vine. One is that the app sometimes fails to properly save clips with multiple cuts, which is a huge disappointment if you've gone to the trouble of shooting in different locations or creating elaborate setups.

And as you scroll through your Vine feed, the automatically playing videos might be handy, but sometimes they're slow, too. These loading issues can be due to a device's hardware or connection speed, though, and aren't always due to the Vine system itself.