Browse the article How imeem Works 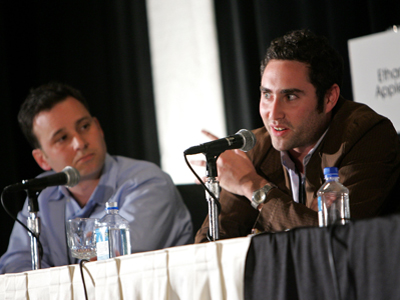 Social networks are more popular in 2009 than ever before. Web sites like Facebook and LinkedIn have changed how people use the Internet. Instead of only interacting with the Web, users are interacting with each other at an unprecedented rate. As if May 2009, Facebook had amassed an astonishing 225 million users and should top 300 million by the year's end [source: O'Neill].

YouTube allows people to post videos of pretty much anything, and they've done so in spades. In May 2009, YouTube account holders uploaded content at a rate of 20 hours per minute [source: YouTube]. You can also use a site like Flickr to upload photos and iTunes to download songs without ever leaving your chair. Some numbers for these sites? Try 42 million visitors per month for Flickr and 5 billion songs sold on iTunes as of June 2008 [sources: Jones, Apple]. The popular Web site Pandora let's music lovers create their own radio station from playlists of artists they like, to the tune of about a million visitors per day [source: Webster].

You're probably getting the picture that the modern Internet user is into sharing things with his or her cyber-neighbor. It was this inspiration that drove Dalton Caldwell and Jan Jannik to create Imeem.com. Imeem is a social network that allows users to share music, videos and images. Sure, you can do this on Facebook and MySpace and other social networking sites, but this is imeem's central focus. Caldwell and Jannik wanted to create a place where folks could share their favorite songs and bands with each other, and where users can listen to streamed music for free or buy it if it suits their fancy. In 2004, Imeem.com was launched. It brought together some of the facets of iTunes, YouTube, Flickr and Pandora and dressed it in the familiar clothes of a social networking site.

If the name sounds funny to you, consider the source. It comes from the word "meme" -- a term coined by author Richard Dawkins describing ideas that groups of people adopt and express to each other. By any name, Imeem has been a hit with users so far. In 2008, the site received more than 20 million users per month [source: Graham].

So how do you become a member of the Imeem community? Easy, just sign up. A basic account is free of charge and you can instantly begin listening to free streaming music and creating custom playlists to share with others. Imeem is able to do this because it made deals with all four of the major record labels -- Warner, EMI, Sony BMG and Universal Music Group. Imeem largely gets its revenue from advertisers, so it agreed to give the major labels a piece of that action, along with a fraction of a cent each time a song is played.

Playlists are assembled with an easy drag and drop into the playlist folder that you've named. Think of it as a mixed tape for the new millennium. Once you've assembled your playlist, it's accessible to anyone who wants to listen to your mix. Band searches bring up every song they've uploaded to Imeem, as well as recommendations for similar music and a band bio if they have one uploaded.

Here's where the social aspect comes in to play. When browsing songs, you get a 30-second preview. If you want to hear the full version of the song, you click on an easy-to-spot link and you're taken, via a separate window, to the account page of the user who initially uploaded the song. Once there, you can view his or her profile, music playlists, video playlists, photos and blog, or send them a message. You can start groups for people with like-minded musical tastes and view the friends and groups of other members on their profile pages.

Here are some other fun things you can do in Imeem:

Imeem has made its name by offering free and legal streamed music for its users to enjoy. With the deals the Web site made with the major record labels, there's no guilt on the user side about getting free music. The artists get paid -- everyone wins.

Let's take a look at how a typical Imeem session might go. Let's say one of your Imeem friends turns you on to a new band. You listen to a few of their cuts on a shared playlist and decide that it's right up your alley. The next thing you want to do is to perform a search to find out what your options are for this band's music. Simply type the name of the band into the search bar and you'll get a long list of every song that's been uploaded to the Imeem network by other users. From here, you can give each song a test drive and check out the pages of people who uploaded it. If you like what you hear, you can go back in your Web browser to the original song listing and get down to business.

Now you have three options: You can add that song to a playlist for free, pay for a ringtone or download the entire song or album. When you click on the "purchase" icon, it takes you to a screen with the album tracks listed for individual purchase for 99 cents or the whole thing for $9.99 for a standard full-length LP. Now you can enjoy that music forever on your computer or transfer it to your MP3 player. If you don't want to buy, you can still keep it on your playlist and enjoy the streaming version for as long as you like.

For a music fan, the benefits of using Imeem are clear: You can listen to as much music as you want for free, make new friends, share photos, videos and even blog. There are also some benefits for musicians, photographers and aspiring filmmakers. Imeem offers the opportunity to create a musician or director profile for promotional purposes. You can post about upcoming shows, new song releases, interviews or any other kind of promotional event your band is involved in. You can also track stats to see how many people are giving your music a try.

Directors can do the same thing on the video side of Imeem by posting film clips and trailers, release dates, behind-scenes-footage and anything else a director thinks can help sell her film project. Directors and producers can also benefit from tracking stats.

One other cool feature for musicians is the potential to actually make some money. Imeem has partnered with SNOCAP, a full-service digital music retailer, to allow bands to make money from streamed music. So if you're a small or mid-level independent artist, you can upload songs to Imeem, register the songs with SNOCAP and get a small percentage of the revenue sharing program in place each time your song is streamed. Basically, you're treated just like the biggest major label bands that have music on the Web site.

For more information on other social networking sites like Imeem, visit the links on the next page.

Imeem made a change in its service in early 2009 -- it set a 100-song and 10-video limit for uploading. But fear not. You can purchase a VIP account depending on your upload needs. For $29.99 per year, users can upload up to 1,000 songs and 100 videos. If you're a super user, you can go all the way and pay $99.99 per year. For this you get to upload up to 20,000 songs and 500 videos. With each of the VIP accounts, you also get a "VIP Badge," customer support priority and the ability to see who has accessed your profile.