Second Life and the Real World 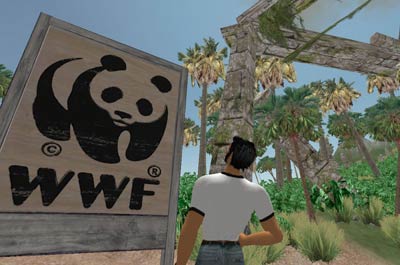 Some people believe that the future of the Internet is in three-dimensional virtual worlds like Second Life, where users will navigate through creative landscapes in search of information and entertainment. As a result, some organizations have jumped into Second Life with hopes that they can get in on the ground floor before the community's popularity explodes. More than 100 companies and organizations have an online presence in Second Life. Many own islands and host events like press conferences or concerts. Others use Second Life to promote charitable organizations or political philosophies. Some companies create a space in Second Life with no clear strategy on what to do with it, which usually backfires -- no one wants to go to a location that's just a big advertisement.

Other companies try to avoid that mistake. Coca-Cola, for example, held a competition in which residents submitted designs for a virtual vending machine. The winner of the competition will star in a video about designing a Second Life object. By creating interactive content, Coke avoided the pitfall of jumping into Second Life without contributing to the world's content.

Other companies use similar strategies. Reebok let users design shoes for their avatars, then order a custom-made copy of the shoes for themselves to wear in real life [source: New York Times]. Starwood Hotels used Second Life to test building and room designs, taking suggestions from residents and incorporating them into real building plans [source: Business Week]. Some companies have even used Second Life as a recruitment tool, seeking out residents who are particularly adept at creating user-generated content [source: CNN Money].

While companies continue to experiment with an online presence in Second Life, a few Internet security experts caution that the virtual world isn't the safest environment in which to conduct business. They point out that griefers can find ways to listen in on confidential conversations or sabotage a company's Second Life location. Most companies only use Second Life as a marketing tool rather than for remote meetings. Some companies are creating virtual environments of their own in order to avoid the security dangers in Second Life.

Some colleges even have a presence in Second Life, holding classes and studying human psychology and sociology in the virtual world. In 2006, Harvard University held a class called CyberOne: Law in the Court of Public Opinion. It was open to the general public of Second Life, where residents could view lectures and participate in discussions [source: Harvard]. Other colleges have experimented with holding classes in the virtual world with varying degrees of success.

Second Life might seem strange and foreign to those of us who are only used to the real world but to residents, it's an important community that's just as valid as any physical environment. Still, whether Second Life marks the future of the Internet or just a passing fad remains to be seen.

To learn more about Second Life and other topics, follow the links below.

Sweden and Estonia both have virtual embassies in Second Life. The embassies provide information to residents about the countries, including how to apply for visas.

Even John Edwards, hopeful Democratic Presidential candidate, has a campaign site in Second Life. His virtual campaign building made headlines after a group of griefers defaced it with obscenities and surreal drawings.

For the latest news in virtual politics, CNN has plans to open a Second Life news network called the I-Report hub. Residents can submit reports about the virtual world, and CNN will use streaming video and audio to broadcast select stories within Second Life [source: CNN].