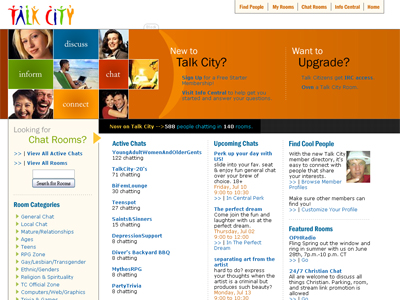 People have been using the Internet for real-time communication since very early in the medium's development. Indeed, our current obsession with text messaging is only the latest version of real-time chatting.

Early versions were simplistic and required knowledge of a program such as Telnet to log in. Instant messaging allowed people to chat with their friends and added innovations such as the ability to send image files or use emoticon smileys.

Of course, the desire to gather in a public place and discuss the day's events is hardly limited to the Internet era. For the ancient Greeks, the agora served this purpose and fostered the earliest ideals of democracy. From those lofty origins were born salons, coffee shops, town halls and every other place that people have met for reasons social or political.

Talk City is a Web site that allows users to enter chat rooms and discuss a number of different topics using a simple interface. Since its inception in 1996, Talk City has been at the forefront of social networking Web sites that allow real-time chat features. In fact, the site is home to some of the oldest online communities in existence. And while Talk City's influence and membership levels have declined in recent years, it still has a loyal following among some Web users.

This article will explain how Talk City works and describe the site's place in the history of social networking Web sites. 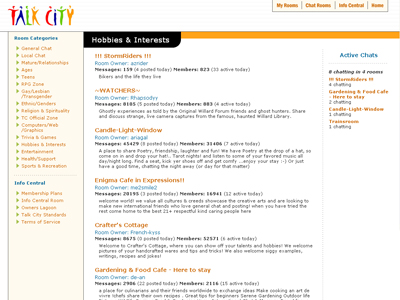 You can talk about lots of things at Talk City, including your hobbies and interests.
Screenshot by HowStuffWorks.com

Using Talk City is very simple. It's essentially a semi-private IRC server. IRC stands for Internet Relay Chat, an older protocol used for online chatting. There are numerous IRC servers, each of which hosts channels on a variety of topics. To connect to an IRC server, a user simply needs the proper software client, and there are free clients available for virtually any operating system.

In practice, chatting at Talk City is much like any other group chat. Users choose their own nickname when they create an account. They can also create a profile that includes photos or other information, and other users can view this profile directly from the Talk City Java chat room. The main screen shows whatever the other users have entered into the chat in chronological order. It looks something like this:

Alice: the weather is lovely out today

Fred: Not here, it's raining cats and dogs.

Alice: I think I'll go to the park.

Sam: Good idea, I'll take my dog to the park!

If there are a lot of users in a room, it can get a bit confusing when multiple conversations are going on at the same time. It's also possible to send private messages to someone. These messages won't be seen by the other people in the room.

There are also games that can be played using Talk City. They're mostly trivia games run by bots, programs that automatically display the questions in the chat window, track each player's answers and score points for correct responses.

Up next, we'll look at some of the benefits of Talk City.

Talk City is superior to some other social networking sites in that it allows users to form online communities with a wider variety of people. They're not restricted to posting updates or chatting with people on a specific network or friends list. They can also chat with large groups of people at once, rather than chatting one-on-one.

Using Talk City offers advantages over traditional IRC servers because members can create profile pages. Also, users who have signed up for paid memberships have to input credit card information, making it less likely that they will be abusive or deceitful (since Talk City knows who they are). Talk City can also police its server and prevent people from deploying malicious programs or viruses.

The business model for Talk City involves the use of advertising as well as paid memberships. A paid basic membership opens up several new features not available to free members, and costs $7.77 per year; however, if you want to run your own chat room on Talk City, it costs $49.50 per year. Each chat room is moderated by the room owner and anyone else who has been designated a moderator, or mod. Mods can restrict topics, the use of adult language, the age of people entering the room and they can even create a waiting period during which a user who enters a room for the first time can't talk.

For more information on social networking sites, channel over to the next page.

A Brief History of Talk City

Talk City was founded in 1996 by former Apple executives [source: Pelline]. The site attracted millions of dollars in investment funds, and for several years was a popular Web destination. In fact, it was used as the official chat site for several corporations and entertainment companies. H&R Block even used Talk City to host official tax advice chats in 2000 [source: Business Wire]. Also in 2000, Talk City found itself at the center of some controversy when it restricted access to WebTV users, an Internet interface that was popular at the time [source: Net4TV]. However, the growing popularity of instant messaging and the eventual rise of more versatile social networking sites like MySpace and Facebook led to a decline in Talk City's user numbers. Today, only a few hundred people can be found chatting on Talk City on most days, generally concentrated in a select few chat rooms.