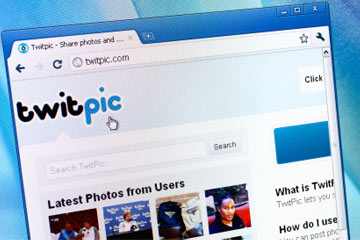 Twitpic lets you incorporate links to photos in your tweets without taking up too much space in your character count.

You have 140 characters remaining. Your fingers are poised over the keys as your mind mulls over the message you want to send out to friends, coworkers and a whole bunch of strangers you've never met. The character counter stares up from the screen, issuing a tacit challenge: Cut out unnecessary words. Shorten that hyperlink. Use contractions. Your message is complete, and the character counter has turned red. Four characters remaining. Success!

Twitter is a social network like no other: It encourages brevity and operates on a system where popular and/or interesting people have many followers. While some use bite size Twitter messages to quickly inform the world every time they eat a banana, the tweeters with thousands of followers use the medium to entertain or spread interesting information and commentary.

Part of being a popular Twitter personality comes from recognition. What have you done? Who do you know? Can you comment on the technology industry or crack a great joke? Do you draw comic books or work for a popular company? If people have a reason to follow you, it's up to you to give them a reason to stick around. That's where learning to tweet comes in.

Post messages with poor grammar and boring content and your follower count will probably stay fairly stagnant. But post on trending topics, put thought into your tweets, share stuff you find really cool, and you might be surprised by how much your social circle grows. Know your audience: Do they expect Indiana Jones references or sharp analysis of Wall Street trades? More importantly, find a good rhythm for tweeting. Tweeting infrequently is fine, but you may not see much follower growth if you're only posting a message a day or every several days. Posting too often is much worse: No one wants to see their Twitter feed clogged up by a single person, especially if that person is repeatedly spamming the same link over and over again to drive traffic to a Web site.

Don't worry too much about making a mistake -- though Twitter messages go out instantly, they can easily be deleted and re-posted with a correction. Over the next three pages we'll break down the important elements of a tweet like links and hashtags, explain how to compose a good tweet and list a few tools that can help you become a better tweeter.

The first step towards posting the perfect tweet is understanding the basic elements that make up posts on Twitter. Basically, tweets are just text. Not even very much text -- while SMS text messages support 160 characters, Twitter posts have to fit within the more rigid confines of 140 characters.

Certain letters typed into a tweet can change the form of the message. For instance, typing a Web address like howstuffworks.com (even without the http:// protocol) will create a hyperlink. That's easy! If you type in the Twitter handle of another person with an @ symbol in the front of it -- for example, @HowStuffWorks -- that's called a mention. Twitter users can see every tweet they're mentioned in. The mention is a great tool for posting Twitter messages because it adds context to a tweet. Suddenly, a vague reference becomes an explorable reference to another person on Twitter.

The mention has a second function that changes the way tweets are routed to your followers. Twitter includes a "reply" button that can be clicked below any tweet. This places a person's name at the beginning of your tweet and is called a reply. This is a bit more like a personal conversation than a regular tweet. The message is still public, and anyone can see it by viewing your profile. However, it won't show up in your followers' feeds unless they are also following the recipient. Sometimes Twitter users want to begin a tweet by mentioning another person. But if they simply wrote "@jill and I just ate lunch. Yum!" only those following the poster and @jill would see the message. A common workaround to this limitation is to put a period in front of the @ symbol: ".@jill and I just ate lunch. Yum!" That tiny dot of punctuation ensures that all your followers see your tweet, even if they don't follow @jill.

There are two more important elements that go into good tweets: images and hashtags. Attaching a fun or interesting picture to a tweet is one way to share something of value with your followers. Many Twitter clients include built-in utilities for uploading images and inserting links into tweets. Web sites like Yfrog and Twitpic allow you to upload an image and will provide you with a short link to insert into a tweet. You can also set your preferences within these apps to post directly to your Twitter feed. Hashtags, like @mentions, are a way to add context to a post. Hashtags are used to denote a trending topic on Twitter or to create a theme for a series of tweets. Hashtags are added with a # followed by text: #academyawards, for example. Twitter's search can pick up trending topics that aren't contained in a hashtag, so they aren't as important as they were when the service first launched. They're often used for jokes or to convey specific emotions rather than as tools to popularize a topic.

Since Twitter is a medium of brevity, every single character has to be put to good use in a 140 character message. Thus the concept of the URL shortener was born: services like bit.ly take a link and create a randomized short URL like bit.ly/3NDrcd to take up as little room in a tweet as possible. These URL shorteners have become so common that they're now built into popular Twitter clients -- dedicated programs for posting to Twitter.

Having a grasp of all the elements mentioned on the last page is important, but throwing those pieces together doesn't automatically create a good tweet. After all, you could just take a picture of a blank wall and @mention a celebrity. That's not a very efficient use of image or a mention, is it? Twitter is primarily a medium for sharing information. Finding the right information to share using just a couple of sentences is the key to posting the perfect tweet, and that's something only you can determine based on the audience you have or hope to create. Do you want people to follow you for your personality? If so, funny, personal tweets -- perhaps self-deprecating or pointing out something unexpected that happened to you in your daily life -- can bring you closer to your audience. If you want to be taken as an expert, make pointed observations without being dry and boring.

Sharing information doesn't just mean sharing every thought that comes into your head. In fact, your tweets don't always have to be your thoughts. Twitter moves fast, and hundreds or thousands or hundreds of thousands of people may see your tweets when you build up a following. Use it as a medium to spread quality Internet media that will interest your followers, like an editorial about Apple's latest game-changing product, an expose of corrupt politicians, or a meticulously animated video created by graphic design students. To use Twitter responsibly, share things you genuinely think other people should know about.

There are plenty of other great tweeters to learn from. In the technology industry, VeronicaBelmont is a smart tweeter to follow: She frequently posts interesting commentary on geek and tech culture while referencing other popular Twitter members. For another themed account like SeinfeldStories, follow FakeAPStylebook. The popular Twitter account's jokes about writing and grammar even spawned a book [source: TheBureauChiefs]. Joke accounts have to be consistently funny and post well-written tweets to differentiate themselves and gain a following.

So have at it! Go tweet to your heart's content. Just remember to know your audience, pace yourself and put a little thought into your tweets. And keep following other tweeters who have mastered the art of commanding an audience in 140 characters or less. If you tweet as well as they do, you might just build up a following, too.

"Twoosh" is a word invented to describe Twitter messages that contain exactly 140 characters. Will anyone notice or care if you write a twoosh? Probably not! Still, go ahead and feel satisfied if you inadvertently create a twoosh by writing out a tweet with the perfect arrangement of words and just enough detail to exactly hit that 140 character limit.