iTunes and Other Mobile Devices 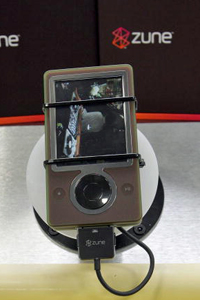 There are a lot of other multimedia devices out there, such as Microsoft's Zune, but they can't use iTunes.
Justin Sullivan/Getty Images

Although Apple is one of the most visible players in the smartphone and mobile media market, it's not the only company of note. There are a lot of other music players and phones that perform many of the same functions of iPods and iPhones, and they use programs similar to iTunes.

One reason for the proliferation of alternative devices is the digital rights management (DRM) protection that iTunes deployed. For much of its existence, iTunes used Fairplay's DRM, meaning files could only be played in iTunes and on iPhones and iPods associated with your iTunes account. The idea, of course, was to prevent illegal copying of media files, but this tactic was also a good way to lock iPod users into using only Apple and iTunes-related products.

In January of 2009, Apple ended its policy of applying DRM copy protection to music and video files sold through iTunes. That meant you could play content you purchased through iTunes on any device that worked with the .AAC (advanced audio coding) file format.

However, Apple still designs iTunes to make sure only Apple products can communicate with iTunes. So even though your Android-capable phone might play .AAC files, you still can't transfer files and playlists vie iTunes.

It's worth mentioning that other companies have tried crashing the iTunes party by making their devices compatible with iTunes. For example, when Palm's Pre smartphone was announced, it synced flawlessly with iTunes. However, Apple immediately introduced an update to iTunes that blocked the Pre.

That means owners of other devices must find alternatives to iTunes. Most media players come with proprietary software that helps you manage their contents. However, that software is rarely as comprehensive as iTunes. For instance, one third-party product, called Doubletwist, lets you sync hundreds of different devices, from Blackberry to Palm Pre, and then search and buy music -- but from Amazon.com instead of iTunes.

Even owners of Apple products sometimes find iTunes sluggish and unwieldy, which prompts them to seek alternatives. For example, CopyTrans Manager is free software that accomplishes many of the same tasks as iTunes, and some users report that it manages content better than Apple's program.