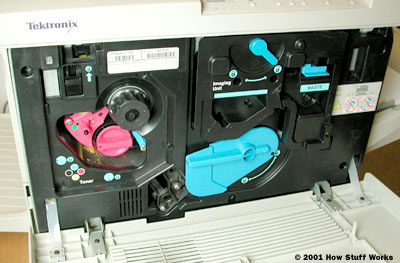 Inside a color laser printer

Initially, most commercial laser printers were limited to monochrome printing (black writing on white paper). But now, there are lots of color laser printers on the market.

Essentially, color printers work the same way as monochrome printers, except they go through the entire printing process four times -- one pass each for cyan (blue), magenta (red), yellow and black. By combining these four colors of toner in varying proportions, you can generate the full spectrum of color.

There are several different ways of doing this. Some models have four toner and developer units on a rotating wheel. The printer lays down the electrostatic image for one color and puts that toner unit into position. It then applies this color to the paper and goes through the process again for the next color. Some printers add all four colors to a plate before placing the image on paper.

Some more expensive printers actually have a complete printer unit -- a laser assembly, a drum and a toner system -- for each color. The paper simply moves past the different drum heads, collecting all the colors in a sort of assembly line.