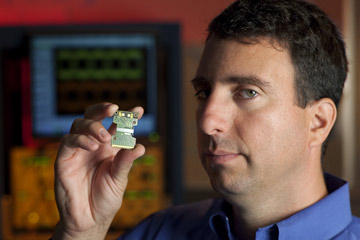 If you were to grab a computer from the late 1980s, another from the late 1990s and one from today and put them side by side, you'd see that over the years we've used a lot of different ports for peripherals. Older computers have special ports just for accessories like keyboards, mice, printers and monitors. With older computers, you'd also have to install a special computer card on the motherboard if you wanted to add other peripherals like joysticks and gamepads.

Then came the Universal Serial Bus, or USB, standard. While USB didn't eliminate all special ports, it did cut down their number. Today, peripherals like keyboards, mice, printers and webcams are available as USB accessories. The ports are hot-pluggable, meaning you can connect or disconnect them at any time. They're also interchangeable in that you don't always have to plug each device into a specific USB port. But USB has its limitations.

One of those limitations is speed. The USB 2.0 standard transmits data at 480 megabits per second (Mbps). That's fast enough for accessories like keyboards and mice to work smoothly but not fast enough for high-bandwidth accessories like computer monitors. The USB 3.0 standard increases the speed to 4.8 gigabits per second (Gbps), which is 10 times faster than USB 2.0, but the computer industry has been slow to adopt USB 3.0.

Intel has its own answer to transferring data at high speeds using a standardized format. It's called Light Peak. Intel representatives say it has the potential to transmit data at more than 20 times the speed of USB 3.0. And as the name suggests, it will do this through the medium of light.

Fiber optics isn't a new technology. At its most basic level, a fiber-optic cable is a glass tube with a reflective material coating the outer surface. If you shoot an intense beam of light down one end of a fiber-optic thread, the light will continue down the thread, bouncing along the inside until it emerges from the other side. If you turn the light off and on, you can communicate through a code. It's a high-tech approach to an old idea that dates back to signaling lanterns.

Instead of communicating in Morse code, fiber optics transmit information in bits. A laser at one end provides the light and a sensor at the other converts the signals into binary data. Some Internet service providers (ISPs) use fiber optics to carry data over their networks. A few provide fiber optic access up to customer homes, meaning those customers can enjoy blazingly fast Internet access. That's because unlike copper wire, which carries electrons to customers, fiber optics aren't limited by the restrictions of matter. Data can travel at the speed of light.

Intel's Light Peak will take advantage of this technology. A special chip is the center of the system. The chip can process multiple protocols. A protocol is a set of instructions that, in a way, are similar to languages. Devices that use a specific protocol don't understand other protocols. By building a chip that can process multiple protocols, Intel hopes to reduce the need for different types of cables and ports.

The lasers that generate the light in Light Peak are vertical cavity surface emitting lasers (VCSELs). They measure 250 micrometers to a side -- a micrometer is just one-millionth of a meter.

Intel explains that the Light Peak chip will have four fibers. Each fiber will be able to carry 10 gigabits of information each second. Why the multiple fibers? Communication across a fiber optic thread only travels in one direction at any given time. With multiple fibers, communication can travel to and from the chip simultaneously. This will help make data transactions happen at a faster rate.

Pros and Cons of Light Peak 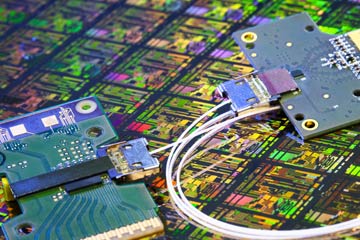 Four thin fibers will carry light to and from the Light Peak chip, ultimately reaching a data transfer speed of 100 gigabits per second.
Intel

Besides speed, there are other reasons to move toward fiber optics. One is that once the cost of manufacturing fiber optic lines drops, it should become more affordable than copper-based wires. Glass is relatively cheap to make -- it's essentially sand.

Another advantage is that fiber optics can carry a signal without a drop in quality over a longer distance. The maximum length for a USB cable is around 5 meters (16.4 feet). But a fiber optic line can be as long as 100 meters (328.1 feet) without a drop in quality. And the fibers in Light Peak are only 125 microns in diameter -- that's about the diameter of a human hair. For applications that require long, lightweight cables, fiber optics win out.

Copper-based wires have another problem -- interference. Copper is vulnerable to radiofrequency (RF) interference, which can result in quality problems. But fiber optics use light, which isn't affected by RF leakage or radiation.

Has Intel run into problems developing Light Peak? It's hard to get information out of the company but one indication that development hasn't been as smooth as it could be is that the first generation of Light Peak technology will use copper rather than fiber optics to carry data. According to Intel, this is because engineers discovered ways to push copper's performance beyond what they thought was possible. But why use copper at all if fiber optics are the future?

It could be that Intel is still perfecting the fiber-optic technology and plans to use the copper wire as a stopgap measure. Early press releases on Light Peak suggested the technology would begin to appear in products beginning in 2010. Intel pushed that timeline back to 2011. While there's no confirmation that engineers have hit obstacles while working on fiber-optic solutions, there's a chance that manufacturing challenges or performance issues have slowed down development.

On February 24, 2011, Apple unveiled an update to its MacBook Pro line of laptop computers. One of the new features is Thunderbolt -- a data transfer port capable of sending information at 10 gigabits per second. Sound familiar? It's Intel's Light Peak with a new name. Whether this will be the new name for Light Peak or if Thunderbolt will remain an Apple-exclusive feature remains to be seen.

There are several questions that Intel hasn't yet answered when it comes to their new technology. One question is whether or not Light Peak will provide power to peripherals? The USB standard can carry electricity from a computer to peripheral devices. That's why a USB keyboard or mouse doesn't need batteries. But fiber optics can't efficiently power devices. In an interview with Laptop Magazine, Intel engineer Victor Krutul explained that Light Peak will deliver power electrically rather than optically. That means Intel will bundle a copper wire along with the fiber optics within Light Peak cables. The copper wire will carry the electricity and the fibers will carry data [source: Butler].

Will Light Peak replace USB 3.0? Currently, the latest version of the USB standard hasn't made a big impact in products. The data transmission rate for USB 3.0 is less than half Light Peak's initial speed. And if Intel is right about Light Peak eventually hitting 100 gigabits per second transfer speeds, there may be little reason to move to USB 3.0. But Intel representatives have said that Light Peak isn't meant to replace or compete against USB 3.0. According to Intel, the two technologies should work together.

Could Intel be delaying support of the USB 3.0 standard while it prepares Light Peak for launch? Some journalists, such as Chris Mellor of The Register, have asked if Intel's delays in supporting USB 3.0 are motivated by a desire to promote the Light Peak technology [source: Mellor]. The official company response denies the allegation. Intel has played a role in developing USB technology, too. But while other chip manufacturers have produced chip sets that support USB 3.0, Intel has delayed production until 2012.

What we do know is that Intel has partnered with Apple. We should expect to see Apple products support Light Peak connections in the near future. Will Light Peak become the new standard for data transmission, or will it follow the example of Firewire and play second fiddle to USB? We'll have to wait and see.

Learn more about computers and data transmission by following the links on the next page.

Will the $100 laptop help save the developing world?
How Shared Computing Works
Can computer chips be air-conditioned?