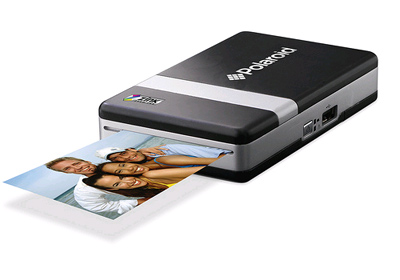 We go together: Polaroid is teaming with its spinoff company to make an instant, ink-free mobile photo printer.
Polaroid/Zink Imaging

How many cherished pictures do you have saved in your phone or digital camera right now? If you're like most people, probably quite a few -- just sitting there, taking up digital space. As much as we enjoy digital picture taking, we miss old-fashioned, hard copy photos. And, despite the availability of high-quality photo printers, laziness and inconvenience often lie in the path of printing those pictures out.

Lucky for us, new mobile photo printers are making it easier and faster for us to free our trapped images from their digital prisons -- all without using a drop of ink.

Without ink, photo printers can be dramatically smaller than their predecessors, making them more convenient and even portable. Some stationary photo printers are advertised as "mobile" because they receive wireless signals to print. However, with inkless printing technology, printers can be mobile in a more radical way -- you can carry it around in a pocket or a purse, just like a cell phone. And best of all, because it doesn't need any kind of traditional ink, the maintenance is as easy as refilling photo paper.

So what's the technology behind this photo-cranking machine? And is it really small enough to fit in your pocket? Learn more on the next page.­

In 2007, a Polaroid spin-off company called Zink unveiled its ink-free printing technology. Then the company teamed up with Polaroid to develop a pocket-sized printer that won't leak ink into your pants. Let's take a look at the PoGo instant mobile printer (the first device of its kind on the market) to get the idea of how the technology works.

The PoGo printer connects to a digital camera through a USB adapter wire, allowing the printer and the camera to directly connect without a computer. Connecting the printer to your cell phone, on the other hand, requires no wires. Instead the printer can use a Bluetooth connection to receive images from the phone. For those who haven't read How Bluetooth Works, this means that your phone (if it's compatible) and the printer can be programmed to talk wirelessly. And when prompted, the phone can send the data for the image via radio waves to the printer.

When it receives the data, the printer prints out a 2-inch by 3-inch color photo. The resulting picture has a peel-off back that exposes a sticky adhesive -- so this photo can be used as a label.

When the printer is functioning on its lithium-ion battery, it can print as many as 15 photos [source: Stone]. When it's plugged in, the AC adaptor (the power cord that adjusts the right current and voltage needed) can keep the printer going for endless prints. With the rechargeable battery attached (but without paper), the printer weighs about 8 ounces [source: Stone]. And, at 0.9 inches by 4.7 inches by 2.8 inches, it holds up to 10 sheets and is not much bigger than a pack of cards. Polaroid is banking on the device's convenient size and weight to attract consumers who'd like to carry it around with their cell phone or digital camera. The Polaroid printer will carry a price tag of about $150 [source: Bergstein].

Aside from Polaroid's efforts, Zink has also partnered with three other companies to develop other devices that will utilize the ink-free printing. Also, Zink is developing a device that is closer to the classic Polaroid camera -- a two-in-one device that doubles as a camera and instant printer.

Zink hopes that in the future, the printers will even be built into cell phones. As there's no need for ink (just paper), compatible printers won't add too much weight or size when attached to a phone or any other device for that matter. Not only that, but because the special printing process can go beyond just photos, Zink's plans also include incorporating a printer with similar technology into devices such as laptops.

So now that we know what it can do, it's time we find out how it does it. Next we'll take a look at the zero-ink process behind the instant printing of images.

Polaroid touts that, together, the process of downloading and printing the photo takes just 60 seconds [source: Polaroid]. But it might take a little bit longer than a minute to print through the Bluetooth connection [source: Stone]. 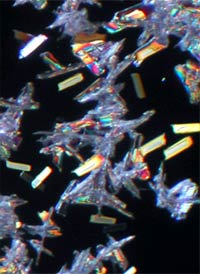 These microscopic crystals are the only "ink" that Zink paper needs.
Zink Imaging

So how do you print a quality photo by installing just paper and absolutely no ink? It's no magic trick -- the answer lies in the paper itself. Observe: before printing, the blank Zink paper is white and seemingly normal. However, like the saying goes, it's what's inside that matters.

To get a closer look at how the paper works, let's inspect the different layers:

In Zink paper, the "ink" is embedded in three layers of heat-reactive dye crystals, sandwiched between a base and protective overcoat layer.
Zink Imaging

As the paper goes through the thermal printhead, the color activated depends on the printhead's temperature and time of application. For example, if the printer needs to activate magenta alone, the heat applied will not be hot enough to activate yellow crystals and won't be applied long enough to activate cyan crystals.

The "lower" temperatures and "longer" amounts of time used on these printers are really neither low nor long -- temperatures are hot, ranging from 212 to 392 degrees Fahrenheit (100 to 200 degrees Celsius), and printing one line takes only 16 milliseconds [source: Clarence].

Different mixtures of cyan, magenta and yellow can yield all the colors that you need to print a quality image. Each 2-inch by 3-inch sheet contains about 100 billion dye crystals and gets activated by 200 million heat pulses [source: Zink].

Although years of toil went into perfecting the science of this paper, Zink has managed to produce it cheaply enough to sell it for about $3 per 10-pack (about 33 cents per sheet) for the PoGo printer [source: Kirsner]. And, although Polaroid's PoGo printer uses 2-inch by 3-inch paper, Zink can produce paper of any size. As Zink and its other partnering companies develop other compatible printers, more sizes will be available.

So, we know this printer is compact and mess-free, but does it have any drawbacks? What are its strengths and weaknesses? Read the next page to learn more. 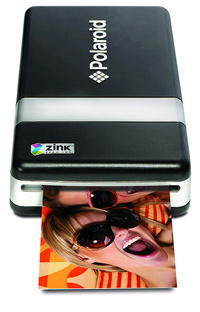 Just how vivid and durable are photos printed from the Polaroid PoGo?­
Polaroid

Let my pictures go! Will the pocket-sized device be the Moses of printers -- setting free the enslaved digital images trapped in phones and digital cameras everywhere? Perhaps, but it might take some more time working in the lab for PoGo to fulfill its promises.

Zink's ink-free paper is a descendent of old-fashioned, thermal fax paper technology. Fax paper is coated with special chemicals, and when heat is applied the paper darkens through a chemical reaction. Zink paper is different because it prints in color (as opposed to black and white, like fax paper).

Zink paper also shares similarities with other printing methods, namely dye diffusion thermal transfer or dye sublimation methods. These methods print in color, but are complicated because they use a third material (such as a ribbon) that contains the ink, which needs to be melted down to the paper. The advantage of Zink is that there's no middleman -- the only materials it needs are the paper and printer.

The obvious advantage of the product is that it's small and light. It can satisfy instant gratification -- you don't have to wait to get home to a stationary printer to get finished prints of your images.

And eco-conscious people will find that the paper is recyclable (unlike thermal paper) and non-toxic. Also, because there is no ink cartridge or ribbon to dispose of, the printer produces no waste.

Given the advantages, you'd expect this technology to take the public by storm. But some drawbacks might prevent it from catching on, at least for a little while.

First, some users have complained that the quality of the photo produced by a mobile photo printer is subpar. One expert reviewer for PC Magazine, David Stone, claimed that half of his test photos came out with skewed coloration and that some were "washed out" [source: Stone]. He also tested the supposed water resistance the printer advertises and found that, although the photos sustain drops that are immediately wiped off, the image suffers if drops dry on it. Time will tell whether these kinks can be ironed out in later advances.

And finally, Stone confirms the obvious suspicion that heat affects these images post-printing (given that heat is creates the print in the first place). When he held a print up to a hot light bulb, the colors became altered. If you'll remember, it takes temperatures of at least 212 degrees Fahrenheit (100 degrees Celsius) to activate crystals in Zink paper. Although photos are unlikely to experience these temperatures normally, it's best to keep them away from hot areas, like the oven or stove. Unlike with thermal fax paper, temperatures are unlikely to get hot enough in a sun-baked car to affect Zink paper.

­The PoGo prints only 2-inch by 3-inch photos; however, Zink can make much larger sizes.
Zink Imaging

For more information on your camera, cell phone and other everyday technology, peruse the links on the next page.