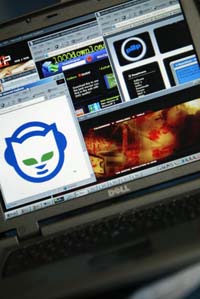 If you want to use Napster Mobile, the most important factor is picking a wireless provider and phone that'll give you the Napster services you want. Downloading music from Napster on cell phones requires having specific wireless providers and a compatible phone.

AT&T's Samsung SLM music phone, for example, allows direct access to Napster Mobile when you click the music key on the phone and hit "Shop Music." You can buy one song at a time or save 50 cents per track by subscribing to receive five tracks per month for $7.49 [source: AT&T].

But you'll need more than the basic phone to play music, no matter which wireless carrier you use. You'll also need a memory card for music storage, and you'll probably want a stereo headset, which may require installing software on your phone. AT&T offers a music bundle of headset and software CD for the Samsung for $40. Wireless Bluetooth stereo headphones start at $60 [source: AT&T Music Devices].

Compatible SunCom phones access Napster Mobile through the wireless carrier's Web link. Downloading songs costs $2 per track and includes a second free copy for your PC. Napster Mobile sends you an e-mail reminder to download that copy from your PC. While there's no charge for using Napster Mobile itself, SunCom charges for the Web link at rates of $5 per month for regional access, plus one cent roaming per KB (kilobyte); $20 per month national with no roaming fee; or one cent per KB access plus one cent roaming per KB under the Pay as You Go plan [source: SunCom Wireless].

For added services beyond just Napster Mobile, you may want to sign up for a Napster subscription plan or Napster to Go so that you can download songs on your PC and then transfer them to your mobile phone. Remember that, unless your wireless carrier offers PC downloads as part of your Napster Mobile plan, you can only play the Napster music you buy on your cell phone.

Cell phone users occasionally encounter problems with Napster Mobile, although most can be overcome fairly easily. Let's look next at what some of the problems are and how you can resolve them.