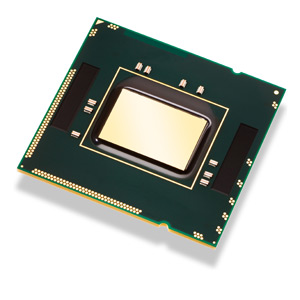 The Core i7 chip with the heatspreader removed.
Courtesy Intel

Nehalem has two branch target buffers (BTB). These buffers load instructions for the processors in anticipation of what the processors will need next. Assuming the prediction is correct, the processor doesn't need to call up information from the computer's memory. Nehalem's two buffers allow it to load more instructions, decreasing the lag time in the event one set turns out to be incorrect.

Another efficiency improvement involves software loops. A loop is a string of instructions that the software repeats as it executes. It may come in regular intervals or intermittently. With loops, branch prediction becomes unnecessary -- one instance of a particular loop should execute the same way as every other. Intel designed Nehalem chips to recognize loops and handle them differently than other instructions.

The improvements to branch prediction and loop stream detection are all part of Intel's "tock" strategy. The transistors in Nehalem chips are the same size as Penryn's, but Nehalem's design makes more efficient use of the hardware.

Next, we'll take a look at how Nehalem microprocessors handle data streams.