Browse the article Why do people pirate software? 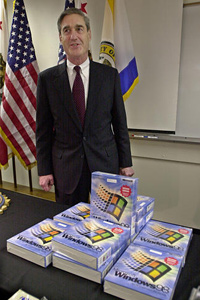 It's safe to assume that shortly after the first personal computers left store shelves, someone was plotting a way to get software for free. According to a report from Business Software Alliance (BSA), pirated software accounted for 41 percent of all software on PCs worldwide [source: BSA]. The BSA also reports that piracy costs software companies billions of dollars in revenue. Skeptics point out that software providers fund the BSA, making its findings suspect. Whether you believe BSA's statistic or not, it's true that piracy remains a big concern for software companies.

This concern has led companies to attempt to solve the problem through several different approaches with varying levels of success. Back in the early days of software -- piracy was around long before the Internet went public -- companies would include copy protection on their products. In some cases, this consisted of a few lines of code that made it difficult to copy the data from one medium onto another. But software protection took other forms as well: Many computer games would require the player to refer back to a game manual or other physical element that shipped along with the game.

Once the Internet and World Wide Web hit the scene, some companies began to experiment with various forms of digital rights management (DRM). Some DRM systems verify software by requiring a connection between the user and a remote server containing the DRM application. The big drawback to this method is that if the company goes out of business or decides to shut the server down, the software on your computer or mobile device suddenly becomes useless because there's no way to verify that you purchased it.

Not all DRM strategies are that extreme. But by its very nature, DRM places restrictions on the user. And because we've become accustomed to being able to manage our belongings any way we see fit, DRM isn't very popular with consumers. For example, in the United States, if you purchase a book, you have a right to sell your purchase. It's part of U.S. copyright law and is called the first-sale doctrine. But DRM restrictions often make it difficult, if not impossible, to sell a piece of software you've purchased and used. And it's much easier to create a copy of a program than it is a novel or magazine.

Could cheap software be the solution? If software didn't cost as much, would people be willing to buy more? 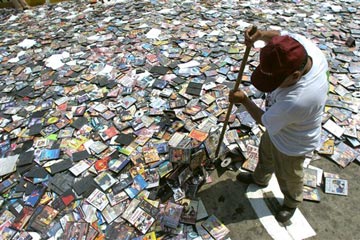 If software were less expensive, would people pirate less? Perhaps if economic factors were the primary cause behind piracy, lowering prices would be an effective solution. Software providers could compensate for the lower profit margin by making it up in volume. But it turns out the situation isn't that simple.

Experts in disciplines ranging from economics to sociology to psychology have examined the motivations behind software piracy. There's no globally accepted explanation for software piracy. But experts in multiple disciplines have suggested a host of factors that contribute to a person's decision to steal software.

Let's get the money issue out of the way first. It's true that some people will steal software based on what it costs. If the price is higher than what the person is willing to pay, that person might pirate the software. A common justification for this kind of behavior goes something like this: The software company is enormous and makes billions of dollars. One stolen piece of software wouldn't be distinguishable for an organization that large and profitable. In other words, since the victims can't feel the loss, stealing from them isn't wrong.

Another common justification weighs cost against perceived value. The pirate might think that a piece of software is overpriced. This doesn't change the fact that the pirate wants access to that software. But rather than pay the asking price for the program, the pirate steals it. In the pirate's mind, the company is to blame for setting the price of the software far above its actual value. But would the pirate pay for the same piece of software if it were more reasonable?

Research into the matter suggests that many software pirates steal programs regardless of the software's price tag. The economic factor provides the pirate with a means to justify his or her actions but it isn't a real motivator. Studies suggest that people view digital property differently than physical property. They don't place as great a value on software as they would a physical object like a car. In addition, they think that stealing software isn't the same as taking a physical object because they're making a copy of a program rather than taking a physical object. Because they perceive software to have less value than physical objects, stealing software doesn't raise the same ethical concerns as grand theft auto [source: Crowell, et al].

Other factors are social and cultural. Economists like C. A. Depken II and L. C. Simmons postulate that social mores may play a role in the decision to pirate software. They suggest that if the members of a culture feel a social distance from authority figures, they may be more likely to engage in behavior like software piracy [source: Depken, Simmons]. That may explain why countries like China are known for software piracy -- the distance between the pirate and any authority figure capable of intervening is wide.

Since software piracy is an international issue, it's possible that politics play a role as well. According to the BSA, the United States experiences a lower rate of software piracy than other nations. The United States also produces much of the software used throughout the world. Citizens of some countries may feel that it's permissible to steal software because it's a product of a large, wealthy nation that's already a dominant power in the world. Others may steal software with a sense of nationalistic pride -- if their culture views the United States in a negative light, stealing from the country may seem like a good thing.

Psychologists at the University of Notre Dame suggest that the computer creates a "psychological distance" between the pirate and his or her victim [source: Crowell et al.]. The computer appears to act like an ethical filter. The act of piracy doesn't seem to carry with it any consequences. The pirate doesn't see the harm in his or her actions and the likelihood of getting caught is low.

The nature of the Internet seems to play a part, too. It's easy to access pirated software. The Internet also gives users a sense of anonymity, which in turn can reduce a person's sense of accountability. When given the chance to grab something valuable for nothing with little to no risk of being caught, it's easy to understand why some people will pirate software.

The Cost of Piracy

Does piracy really hurt the software industry? Paul Craig quotes software pirates in his book "Software Piracy Exposed" who don't seem to think their activities hurt anyone. They say that companies don't lose that much revenue due to piracy because software pirates aren't the type to purchase software. Software companies aren't losing revenue because they aren't losing sales. Pirates are either going to steal software or they'll go without -- in either case the software companies don't make money.

But some pirates steal software in order to sell it to other people. They may undercut the original company by a wide margin. These pirates do cost companies money. Perhaps the pirates' customers wouldn't purchase the software for the full price but it's impossible to say that for certain. In this case, lowering the price of the software might deter pirates or their customers. It won't stop all piracy, however, since some people will still want to get the program without paying for it.

Companies face a difficult situation. Lowering the price of their products might increase sales and discourage some piracy but it won't eliminate the problem. Concentrating on building customer loyalty and developing a strong product may also help reduce piracy. Many pirates claim that they are willing to pay for products from companies they trust and admire. But how do you trust a pirate?

Software piracy is a real and ongoing concern for hundreds of companies. We need to study the motivation behind software piracy more thoroughly before anyone can claim to understand it. It appears to be a complex issue with no single cause, and that may mean there is no simple solution to the problem. Lowering software costs may result in more sales as people who would neither pirate nor buy expensive software open their wallets for a purchase. But it may not make a dent in piracy statistics. For that to happen, we'll need to see a shift in our perception of the value of software itself.

Learn more about software and economics by following the links on the next page.

Software companies aren't the only entities hurt by software piracy. Some hackers take advantage of people's greed and willingness to pirate software by uploading fake pirated copies of popular programs that actually hide harmful malware. The would-be pirate downloads the software, installs it and then unleashes the malware on his or her computer. It's a tough way to learn a lesson about piracy.