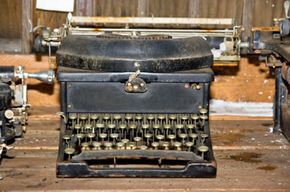 Mark Twain boasted in an unpublished autobiography that he was the first author to use a typewriter for fiction. He wrote that he dictated his work to a secretary, who in turn used a Remington typewriter. Twain submitted his manuscript for "The Adventures of Tom Sawyer" in a typewritten format back in 1874 [source: Mark Twain]. The Remington was a manual typewriter, meaning there were no cords or wires to worry about. It was a human-powered, standalone machine -- a wireless printer.

Since the days of Mark Twain, the home office has become much more complex. Today, you might find a computer, a printer, a router, a cable or DSL modem, a fax machine, a phone and other devices all networked together. In a wired network, that can mean a lot of cables. And as we all know, cables have a habit of tangling themselves into a big, frustrating pile of knots.

Another problem with wired networks is that the cables limit where you can position devices. Wired devices are literally tethered to the network. Connecting a computer in one room to a printer in another room could require running cables down a hallway or even up or down a flight of stairs. Keeping cables out of the way becomes a challenge.

Several inventors and engineers have created solutions to these problems, cutting down the number of cables you need to run a home network. Now you can create a document on a computer and send it to a printer without linking the two devices together with a cord. You can even send print jobs from other devices like cell phones or PDAs. And there's more than one way to do it! Whether you use pulses of light or radio signals to send print jobs, you're no longer tied down by cables and cords.

The earliest wireless printing technology used pulses of light to send commands from a computer to a printer. How can printers use infrared light to receive print jobs? Find out in the next section. 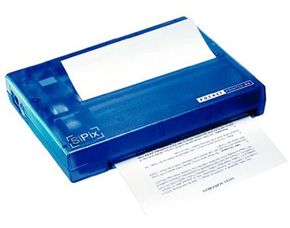 The SiPix A6 Pocket Palm Printer is a mobile printer that can receive IrDA signals.
Courtesy Amazon

Early wireless printers used technology standardized by the Infrared Data Association (IrDA). The IrDA is a nonprofit organization in charge of creating standards for devices that use infrared signals to transmit and receive information. Without these standards, different companies might produce devices that used the same signals to operate. That could result in signal interference and the affected devices might not work correctly.

IrDA devices, whether they are printers or other gadgets, communicate by transmitting and detecting pulses of light from the infrared spectrum. To the human eye, light in the infrared spectrum is invisible. We can only see infrared light by using gadgets like night vision goggles. But we can sense infrared radiation -- rather than see it, we feel it as heat.

The IrDA has standards for several data rates -- the amount of data a device can send or receive per second -- ranging from 115.2 kilobytes per second (kbps) to 16 megabytes per second (Mbps) [source: IrDA]. Communication between IrDA devices relies on transceivers -- a combination of a transmitter and a receiver. That means IrDA devices are capable of sending and receiving data using infrared signals. Microprocessors in the devices translate electronic commands -- such as a print job -- into pulses of infrared light. The receiving device detects and decodes these pulses, changing them back into the original electronic command.

In order to use IrDA technology to print, you need the following elements:

That's one of the downsides to IrDA technology: It relies on a line-of-sight configuration. Because IrDA devices use light to transmit information, they need an unobstructed path between the transmitter and receiver to work. This limitation means that you can't print to an IrDA printer if you're too far away from it or if there are walls or doors between your computer and the printer.

On the other hand, as long as the two transceivers aren't blocked, IrDA devices can be reliable and secure. They aren't prone to suffering interference problems, and they aren't as susceptible to hackers as other wireless solutions. But many manufacturers have abandoned IrDA technology in favor of another popular alternative: Bluetooth technology.

What's the difference between Bluetooth and IrDA printers? Keep reading to find out.

Not Just For Printing

Lots of devices use infrared light to communicate with other gadgets. Remote controls use infrared signals to send commands to electronics like televisions or stereo systems. Some older PDAs and cell phones use this technology to allow the user to synchronize files between the gadget and a computer. 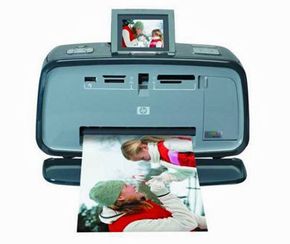 This HP A618 Photosmart Compact Photo Printer uses Bluetooth technology to link with other devices, including digital cameras.
Courtesy Amazon

There are two different classes of Bluetooth devices. The weaker class can transmit signals over a 10-meter (33-foot) range. The other class can send signals as far as 100 meters (328 feet) away. Bluetooth technologies allow users to create personal-area networks (PANs). Devices can detect and interact with one another as they come within range of each other.

Unlike IrDA, Bluetooth signals aren't dependent upon line of sight. Bluetooth networks can extend beyond walls, doors and even different levels of a building. As long as the devices are within range, they can interact. Bluetooth devices can transmit data at a rate of up to 3 Mbps to other Bluetooth devices in range [source: Bluetooth].

With a Bluetooth network, it's possible to send print jobs from multiple devices to the same printer. You can have your very own network printer at home.

Another way to print wirelessly is through a WiFi network. Find out more about it in the next section.

Because Bluetooth devices can connect to networks so easily, it's important to be aware of security issues. If your Bluetooth network isn't secure, then it might be possible for someone else to eavesdrop on you using another Bluetooth device. Most of the burden of Bluetooth security falls on the shoulders of electronics manufacturers, who can choose to produce devices that are secure or unsecured.

Two other wireless technologies are Ultra-Wideband (UWB) and Certified Wireless USB. The UWB approach requires devices to transmit information over a wide spectrum of radio frequencies using lower power transmissions. Several competing organizations are trying to establish UWB standards. With Certified Wireless USB, computers send data wirelessly through adapters that plug into USB ports on computers and other devices. Data rates are much higher with this approach, but the range of transmission isn't as large [source: Bluetooth]. 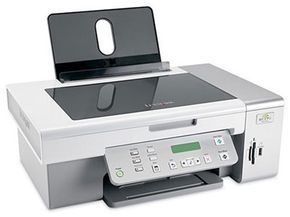 Wireless networks are becoming increasingly popular in businesses and in the home. The majority of these networks use WiFi, also known as the 802.11 set of standards. Like Bluetooth, WiFi sends data using radio signals. The WiFi frequencies are 2.4 GHz and 5 GHz. WiFi data rates range from 11 Mbps to 140 Mbps, depending on the type of 802.11 network.

There are several printers on the market that have WiFi transceivers built into them. Network administrators must first install the printer to the network so that other devices connected to the system can locate the printer. Once connected, compatible devices can send print jobs to the printer. This comes in handy for offices or households with lots of computers -- there's no need to buy a dedicated printer for each machine if everyone can access the same one.

Whenever you are working within a wireless network, it's important to consider security. An unsecured wireless network is an attractive target for black hat hackers and Internet thieves. There are several devices on the market that can detect wireless signals -- there's even a T-shirt that can do it. Some people use such devices to seek out unprotected wireless networks in order to get free Internet access. If you use an unsecured network and have a bandwidth limit with your ISP, you could be in danger of receiving a very large bill for Internet usage. And if the moochers used your network to perform illegal activities, you might end up being the one accused of a crime.

An unsecured network could give hackers the opportunity to access your machines remotely. A skilled hacker might be able to get all sorts of private information from your computers. Identity theft can be very difficult to resolve.

For these reasons, it's always a good idea to make sure your network is secure. That includes using firewalls to protect your network from outside interference. You should use password protection on your network. Using a good encryption standard such as WiFi Protected Access (WPA) is also important.

Some WiFi printers have a button that activates WPA encryption, allowing secure connections with other devices. By pushing the button on the printer and activating a similar feature on each computer on the network, you can create a secured network between each computer and the printer. That might seem like overkill, but considering the risks of unsecured data transmission, it's a good idea.

If you're tired of tripping over cables or being chained to one location, you might want to look into wireless printing. Think about your needs -- they'll determine which method will work best for you.

To learn more about wireless printing and related topics, take a look at the links on the next page.

Even though WiFi is also known as wireless networking, a few cables are necessary for it to work. For example, you need power cords for your devices (unless you run them on battery power). And unless you live in an area where you can access municipal WiFi, you'll also need to have a cable or DSL modem and a wireless router. You need a coaxial cable for a cable modem or a DSL phone cord for a DSL modem. You'll also need an Ethernet cable to connect your modem to your wireless router.

Jonathan Strickland "What are the different ways you can print without wires?" 12 August 2008.
HowStuffWorks.com. <https://computer.howstuffworks.com/print-without-wires.htm> 23 September 2021
Print | Citation