Think you know how routers work? These devices use intricate formulas to figure out exactly where to send a packet and how to get it there.  See more computer networking pictures.

If you have read the HowStuffWorks article How Routers Work, then you know that a router is used to manage network traffic and find the best route for sending packets. But have you ever thought about how routers do this? Routers need to have some information about network status in order to make decisions regarding how and where to send packets. But how do they gather this information?

In this article, we'll find out precisely what information is used by routers in determining where to send a packet.

Routers use routing algorithms to find the best route to a destination. When we say "best route," we consider parameters like the number of hops (the trip a packet takes from one router or intermediate point to another in the network), time delay and communication cost of packet transmission.

In LS algorithms, every router has to follow these steps:

The Dijkstra algorithm goes through these steps:

We will use this algorithm as an example on the next page.

Lastly, E is the destination, so we stop here.

Although this algorithm works well, it's so complicated that it may take a long time for routers to process it, and the efficiency of the network fails. Also, if a router gives the wrong information to other routers, all routing decisions will be ineffective. To understand this algorithm better, here is the source of program written by C: 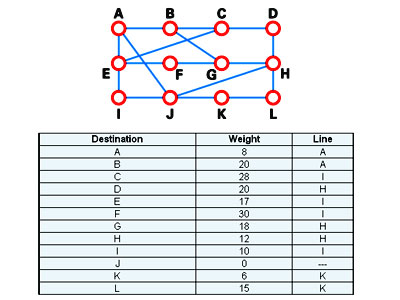 As the table shows, if router J wants to get packets to router D, it should send them to router H. When packets arrive at router H, it checks its own table and decides how to send the packets to D.

In DV algorithms, each router has to follow these steps:

One of the most important problems with DV algorithms is called "count to infinity." Let's examine this problem with an example:

Imagine a network with a graph as shown below. As you see in this graph, there is only one link between A and the other parts of the network. Here you can see the graph and routing table of all nodes:

Now imagine that the link between A and B is cut. At this time, B corrects its table. After a specific amount of time, routers exchange their tables, and so B receives C's routing table. Since C doesn't know what has happened to the link between A and B, it says that it has a link to A with the weight of 2 (1 for C to B, and 1 for B to A -- it doesn't know B has no link to A). B receives this table and thinks there is a separate link between C and A, so it corrects its table and changes infinity to 3 (1 for B to C, and 2 for C to A, as C said). Once again, routers exchange their tables. When C receives B's routing table, it sees that B has changed the weight of its link to A from 1 to 3, so C updates its table and changes the weight of the link to A to 4 (1 for C to B, and 3 for B to A, as B said).

This process loops until all nodes find out that the weight of link to A is infinity. This situation is shown in the table below. In this way, experts say DV algorithms have a slow convergence rate.

The "count to infinity" problem
HowStuffWorks.com

One way to solve this problem is for routers to send information only to the neighbors that are not exclusive links to the destination. For example, in this case, C shouldn't send any information to B about A, because B is the only way to A.

As you see, in both LS and DV algorithms, every router has to save some information about other routers. When the network size grows, the number of routers in the network increases. Consequently, the size of routing tables increases, as well, and routers can't handle network traffic as efficiently. We use hierarchical routing to overcome this problem. Let's examine this subject with an example:

We use DV algorithms to find best routes between nodes. In the situation depicted below, every node of the network has to save a routing table with 17 records. Here is a typical graph and routing table for A:

In hierarchical routing, routers are classified in groups known as regions. Each router has only the information about the routers in its own region and has no information about routers in other regions. So routers just save one record in their table for every other region. In this example, we have classified our network into five regions (see below).

For more information on routing and related topics, check out the links on the next page.

Roozbeh Razavi is a student of electronic engineering at K.N.T University of Technology. He is also a translator of the book "Networking Essentials Plus," by Microsoft Corporation. His studies have focused on areas of TCP/IP, routing and network security.