It's Not Sandy Bridge's Fault! 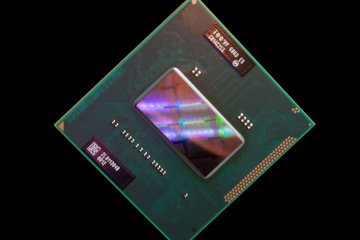 Shortly after computers with Sandy Bridge chips hit store shelves, the news broke: an element in the computers' motherboards had a manufacturing flaw. Over time, this flaw would cause the computer's performance to decline, negating the benefits of the new microprocessor. Depending upon the source, a reader might get the impression that the Sandy Bridge chip was a lemon.

In truth, the problem didn't have anything to do with the microprocessor. It had to do with the series-6 chipset called Cougar Point. While still an Intel product, Cougar Point is not the same thing as Sandy Bridge. The chipset includes special chips that provide the link between computer hardware and computer software, including the chips that process information coming in and going out through various computer ports.

The culprit was a serial ATA 2 (SATA 2) chip. A SATA chip allows a computer to communicate with external devices such as external disk drives through a serial wire. The problem goes back to the issue of electron leakage -- the transistor gates received too high a voltage to restrict electron flow properly [source: Lal Shimpi]. And there's no easy fix beyond retooling the manufacturing process to eliminate the flaw. For that reason, some motherboard manufacturers and computer vendors put a halt on ordering Sandy Bridge systems until Intel resolved the issues.

Intel claimed that only 15 percent of all Sandy Bridge customers would notice a decrease in performance. The company also stated that the problem didn't affect all machines with a Sandy Bridge processor -- only some desktop computers with the Intel P67 chipset. But the damage was done -- shipments stopped for a short time while Intel addressed the problem. Intel then resumed shipments of Sandy Bridge machines that weren't affected by the problem.

Even for customers who own machines that have the flawed chipset, things aren't so dire. The flaw shouldn't be noticeable in the short term. It's expected that Intel will issue a recall once an improved chipset is available. It's also important to remember that this problem had nothing to do with the Sandy Bridge processor itself.

While the Cougar Point problem was a stumbling block for Sandy Bridge, it's likely Intel will bounce back from this it without too many scars. The chip provides more performance than any of its predecessors in the consumer market. And what's in the future? That would be the next tick in Intel's strategy: Ivy Bridge. That chip will have transistors at the 22-nanometer scale. That's big news for a small transistor.

Learn more about microprocessors and related topics below.