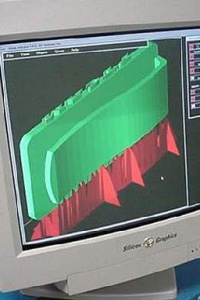 Stereolithography, also known as 3-D layering or 3-D printing, allows you to create solid, plastic, three-dimensional (3-D) objects from CAD drawings in a matter of hours. Whether you are a mechanical engineer wanting to verify the fit of a part or an inventor looking to create a plastic prototype of an invention, stereolithography gives you a fast, easy way to turn CAD drawings into real objects.

3-D printing is a very good example of the age we live in. In the past, it could conceivably take months to prototype a part -- today you can do it hours. If you can dream up a product, you can hold a working model in your hands two days later! In this edition of HowStuffWorks, we will take a tour of the stereolithography service bureau at PT CAM (Piedmont Triad Center for Advanced Manufacturing) so that you can understand everything involved and see some actual 3-D models that this technology has produced! 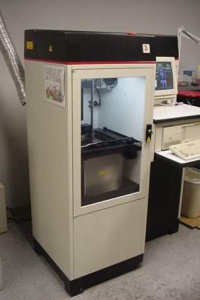 This machine has four important parts:

If you stand next to the stereolithograph apparatus (SLA), you can actually see the laser as it builds each layer. 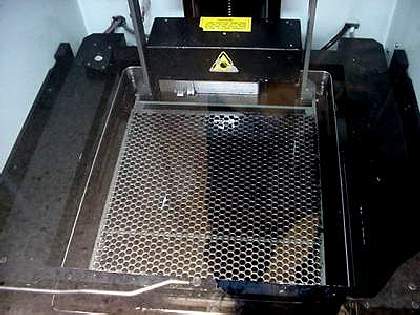 The platform in the tank of photopolymer at the beginning of a print run.

This is not a particularly quick process. Depending on the size and number of objects being created, the laser might take a minute or two for each layer. A typical run might take six to 12 hours. Runs over several days are possible for large objects (maximum size for the machine shown above is an object 10 inches (25 cm) in three dimensions).

You start by creating a 3-D design for your object in a CAD program. This design is tweaked before building with supports that raise it up off the tray slightly and with any internal bracing that is required during building. The SLA then renders the object automatically (and unattended). When the process is complete, the SLA raises the platform and you end up with your 3-D object. If the object is small, you can produce several of them at the same time if you like. They all sit next to each other on the tray.

The following photo shows a tray after building is complete, with several identical objects that were produced simultaneously:

The platform at the end of a print run, shown here with several identical objects.

Once the run is complete, you rinse the objects with a solvent and then "bake" them in an ultraviolet oven that thoroughly cures the plastic.

What You Can Create with Stereolithography 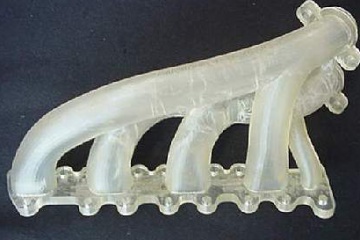 Stereolithography allows you to create almost any 3-D shape you can imagine. If you can get it into a CAD program, you can probably create it. The only caveat is the need for structural integrity during the building process. In some cases, you need to add internal bracing to a design so that it does not collapse during the printing or curing phases.

The photo on this page shows you a typical object that has been created at PT CAM. The piece is lightweight and has the strength of polystyrene plastic. You can mount it, drill it, etc., so you can try it out in actual use. For example, a chair manufacturer will produce different arm rest shapes using stereolithography and try them out on actual chairs to see how they feel.

Stereolithography is not an inexpensive process. The machines themselves usually cost in excess of $250,000. They have to be vented because of fumes created by the polymer and the solvents. The polymer itself is extremely expensive. CibaTool SL5170 resin, a common photopolymer used in stereolithography, typically costs about $800/gallon. For these reasons, it is uncommon to find stereolithography machines anywhere but in large companies.

However, there are service bureaus that can make the advantages of stereolithography available to smaller shops and individuals. For example, PT CAM will do stereolithography for $55/hour, as well as allowing companies to purchase blocks of time for as low as $30/hour. That's not cheap, but compared to purchasing your own SLA and resin or having parts machined, it is a real bargain. You can e-mail your CAD design to PT CAM and, in many cases, get your parts shipped back to you in a day or two. The short cycle time is one of the most appealing things about stereolithography!

Special thanks to Joel Leonard, Jerry Watkins and Steve Oneyear for their help in creating this article!