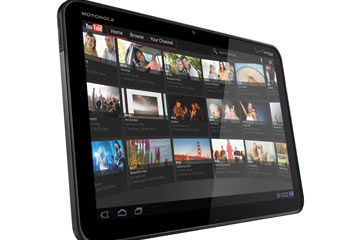 Do tablets like the Motorola Xoom have a crash screen?
Courtesy Motorola Mobility

Technology lets us do amazing things. We can communicate with people on the other side of the world through voice communication, instant messaging, e-mail or in other ways. We can watch films and television shows, listen to the radio or even produce our own entertainment with nothing more than a handheld gadget that fits in a pocket. And every day, we see more apps launch that give us seemingly endless options of games, productivity software and weird programs that defy categorizations.

But when technology fails, it can be easy to forget all the cool things we can normally accomplish with a device. We might instead immortalize the fail screen with a nickname like the Blue Screen of Death, or BSOD. The BSOD refers to a screen that pops up on Microsoft Windows machines when the operating system encounters a critical error. Bill Gates himself had an infamous BSOD pop up during a demonstration of Windows 98 at Comdex, which was one of the world's largest technology conferences at the time.

Do tablet devices have crash screens similar to the BSOD? Most fail screens for tablets aren't at the OS level. Instead, they tend to be at the application level. When an app encounters a critical error, you may see a message pop up prompting you to force the app to close prematurely. You may also have the option to report the crash, which will send data to the app developer, the OS developer, the hardware manufacturer or some combination of those three entities.

System-level crash screens in tablets are rare. That doesn't mean tablets are immune to critical failures. Instead of a crash screen, you may notice that your tablet isn't responding to touch commands. Everything will appear to be frozen. You may be forced to power cycle your device. In the words of Roy from "The IT Crowd," you'll need to turn it off and on again.

Only a few tablets have an actual crash screen -- it really depends upon the hardware manufacturer and the operating system. If your tablet is displaying a weird screen or otherwise doesn't seem to be operating correctly, it's best to contact the manufacturer and find out what your options are.

I own and use both Android and iOS gadgets on a regular basis and I'm no stranger to app failure. It's a frustrating experience to activate an app and have it crash within moments of launch. It's even worse when you have just finished typing a long message on an on-screen keyboard just before the app gives up the ghost. But mobile operating systems seem to be fairly stable. I've had my share of system crashes, but have yet to encounter an actual crash screen. I hope the trend continues.