by Stephanie Crawford
Prev NEXT
8 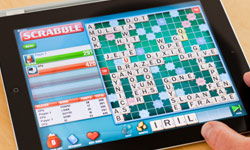 "Scrabble" for iPad keeps your mind nimble and the noise level down.
©iStockphoto.com/mbbirdy

Another Zynga creation, "Words with Friends," grew in popularity among iPhone users before Apple released the iPad. "Words with Friends" allows you to play an interactive game that resembles the trademarked board game Scrabble. The game had its limitations, including the fact that you could only play with one other person and that it lacked a one-player-against-computer option.

For $9.99, "Scrabble" for iPad is expensive compared to its competition. Its features and clean HD interface might make it worth the price, though. Other selling points include the Scrabble Teacher feature, which shows you the best word you could have played from your last turn. Besides being able to mute sounds from the app, you can also select and play music from your iTunes library without leaving a game.

Some noise-free game options are even simpler than card or board games. For the younger set, or those just wanting something that doesn't require as much brain power, the next iPad game might be a great pastime.