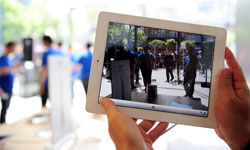 Love your iPad? With a few accessories, you can get even more from your favorite electronic device.
China Photos/Getty Images

Electronics and computing giant Apple has a history of releasing innovative products. From the iPod media players that formed the base of the music industry's shift to electronic files to the phenomenally successful iPhone line of smartphones, the company makes waves with its product launches.

April 2010 was no different, when Apple released the first generation of its iPad tablet computers. Other manufacturers had tried to launch tablet devices in the past, but these slim, touchscreen devices quickly took over the category. By summer 2010, more than 80 million consumers were tapping, dragging and touching their way through the iPad's revolutionary features [source: Apple].

There are plenty of reasons why consumers flocked to the iPad. Beyond its sleek design, the device offered image quality and computing power that far exceeded that of even the best smartphones. Businesses began developing innovative applications for the devices, and home consumers from gamers to movie and picture buffs adopted the iPad as an essential entertainment tool.

If you're one of the tens of millions of iPad owners, you've probably discovered not only the wide range of uses for the device, but also the wide range of aftermarket accessories that are available for it. Some accessories may do little more than make your iPad stand out, but others are nearly essential for helping you make the most out of this innovative device. Read on, and learn about five iPad accessories that didn't come in the box, but are worthy -- if not essential -- additions to your iPad experience.

The iPad and iPad 2 come with two charging options right out of the box: You can charge them using the included wall adapter, or you can plug in and charge directly through your computer, though at a slightly slower charge rate. But given the mobility of the iPad, it makes sense to add at least one more charge adapter to your bag of accessories.

Thanks to these essential devices, your driving time between client meetings or to and from the office can now serve a double purpose: You can make use of that time to charge your iPad, keeping you fully mobile when you get to your destination. 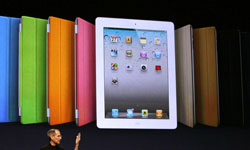 For added protection (and style!), the Apple iPad 2 is available with a variety of different-colored case protectors.
Justin Sullivan/Getty Images

Some iPad users prefer their tablets' white, black or silver case colors. But for others, the tablet's non-screen portions are a blank canvas for personalization -- and surfaces in need of protection.

Many companies offer decorative skins for the iPad and iPad 2. With a nearly endless variety of colors and designs to choose from, it's likely you'll be able to select a skin that makes your iPad stand out from your crowd.

For others, though, an iPad skin is as much about protection as it is customization. Sleek silicone skins wrap around the back and edges of the iPad, with holes cut into them to leave room for switches, cameras and ports. These skins, while available in a variety of colors, are more about protecting your iPad from scratches and light bumps.

The choice is yours: Choose a skin that stands out, or choose one that keeps your iPad's finish looking like new. Prices for both types of skins tend to be fairly low, meaning it's easy to change skins if you change your mind.

Skins and silicone protective wraps are great for protecting your iPad's finish from scratches and marks. But the mobile nature of the device means that you're at risk for dropping, bumping or crushing damage when going mobile.

Unless you're planning on just using your iPad in one location, a protective carrying bag is a wise investment. These bags are often smaller cousins of the protective laptop satchels and backpacks tech-savvy users have been carrying for years. But thanks to the iPad's small size, they can be much less obtrusive and more flexibly fit your style and carrying needs.

The biggest difference between these accessories and skins is that skins can stay in place while you use the iPad, while these protective accessories are for carrying, not protection during use. If you're truly concerned about protecting your iPad in all scenarios, consider buying both a protective skin and a protective carrying bag or case. 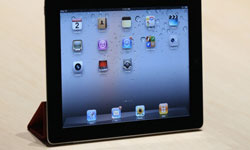 Even the simplest of stands can make your iPad much easier to use.
Justin Sullivan/Getty Images

The tablet computer is arguably a technological breakthrough, but current models suffer from one common problem: The tablet's flat design can make it difficult for multiple people to watch a video at once, and this can become annoying if you're using one and want to keep both hands free.

Enter the tablet stand. Sometimes called easels or docking stations, these devices range from simple folding props to sophisticated interactive ports that can connect your iPad to cameras, speakers or a TV. But regardless of their complexity, all of these stands give you the ability to set your iPad upright for hands-free viewing.

When choosing a stand, you should consider how you'll use the iPad. If you're simply looking for something to hold it at a convenient angle on your kitchen counter as you read recipes off the screen, then a simple, inexpensive folding stand may do the trick. But if your iPad use includes typing on a keyboard, giving presentations or evaluating photos using a link to your camera, a more sophisticated docking port will likely be your best option.

iPad users who want the ultimate note-taking device, or plan to get the most out of the iPad's computing power, are prime candidates for this next accessory. While the iPad does allow on-screen typing, a separate keyboard can make data entry or note-taking much easier and faster, all while leaving the entire iPad screen available to show your work.

Two main types of iPad keyboards are available: Wired keyboards, which connect to the iPad through a cable, are typically less expensive -- though bulkier -- than their counterparts, wireless keyboards. Going wireless is likely to cost more, and you'll have to keep track of battery levels for both your iPad and keyboard. But the convenience of being able to turn on the iPad, pull out the keyboard and start typing is well worth the extra vigilance for many users.

Using an iPad keyboard means carrying an additional device, often as big as the iPad. Plan accordingly: If you think you might do a lot of typing on your iPad, purchase a carrying bag big enough to hold both the tablet and a keyboard, even if you have yet to purchase the keyboard. This will leave room for expansion, making sure you can travel with the accessories you need to get the most out of your iPad.

For more tech articles, check out the links on the next page.