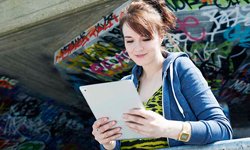 Buying a tablet computer for art is a tradeoff, but professionalism doesn't have to come at the cost of price. The first generations of drawing tablets were serious machines: bulky, expensive and not particularly versatile. As touch-screen technology and other inputs have improved, graphics tablets evolved to better represent a wider range of drawing experiences. And, if you can't fathom spending the cash without getting some traditional computer functionality in return, there are even a handful of mainstream tablet options that might suit your needs.

When you get serious about making the investment in a graphics tablet, it helps to have some idea of what you want, even if you end up changing your mind in the end. Shopping for an art tablet is a lot like shopping for traditional art supplies, because the artist's skills, specialties and technique all play huge roles. And, as anyone who's stocked a home art-studio would know, none of it comes cheap.

A serious illustrator is likely to prefer one of the many dedicated graphics tablets available, which tend to have a streamlined, utilitarian design that's intended to mimic traditional illustration technique and the feel of drawing in a sketchbook. Though the pencil-to-paper comparison might require some suspension of disbelief, it's easy to see the appeal. There's a lot of variation amongst different tablet models in terms of how the surface interprets the artist's strokes (finding the right one is key to a comfortable and intuitive drawing experience). Need less pressure, or more precision? Try different stylus and pen models, which further refine and customize the tablet.

But higher-end, multipurpose tablets are better at performing computer functions (such as processing speed) and, because they have more support from developers and the computer industry, they're more customizable with software, apps and accessories. So, for our list, we chose a mix of tablets designed specifically for drawing and others that just happen to be well suited for artistic tasks. Let's get started!