by Cherise Threewitt
Prev NEXT
5 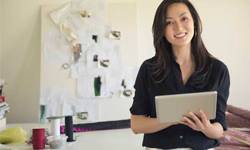 As touch-screen technology and other inputs have improved, graphics tablets have evolved to better represent a wider range of drawing experiences.
Eternity in an Instant/Taxi/Getty Images

Android devices aren't really known for catering to creative types -- they've traditionally been favorites of the technically-inclined crowd, thanks to the platform's developer-friendly approach. They're solid computers, however, and so in theory, can handle the requirements of a graphics tablet. In spring of 2011, Android and HTC put that theory to the test.

The HTC Flyer is another tablet that's primarily for the multitasking crowd, but its speed and agility are a bonus if you're inclined to doodle. At a nimble 7 inches (17.8 centimeters), it's easy to carry around, but that can be said of most of its competition. The Flyer is noteworthy because it features a pressure-sensitive stylus, which improves control. (It's actually one of the first Android tablets to be designed for use with a stylus, and though others have come along in the meantime, the Flyer's still got creative street cred.)

The Flyer also has a well-designed and intuitive interface, so nothing slows down the creative process. Drawing apps are reasonably versatile and rather simple to use, although experienced digital artists might find the options a bit short on the depth and breadth required for particularly detailed illustration. So, though reviews caution that the Flyer might be too lightweight for really dedicated artists, this tablet option should suit the mainstream customer quite nicely.