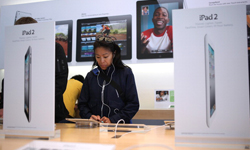 A customer looks at the new iPad 2 at an Apple Store in San Francisco, Calif.
Justin Sullivan/Getty Images

When Apple's original iPad tablet computer came out in 2010, critics didn't find many things to critique about the elegant device. But two of the few faults they could find seemed pretty major: It couldn't play Flash, the dominant format for online video; and it couldn't multitask, or allow a user to run multiple programs at once to be more efficient.

Combined, these two deficiencies lent credence to the argument that the iPad was just a novelty -- more toy than serious computing tool.

With the iPad 2, released in March 2011, Apple listened to at least one of those complaints. One of the main selling points of the second-generation device is that now, similar to a full-sized personal computer, you can multitask. If you wish to toggle back and forth between being productive in iWork and rewarding your industry every few minutes by playing a level of Plants vs. Zombies, you can now do so, tablet memory permitting, without shutting down either application.

In this article we'll explore five ways of getting more out of the multitask feature on the iPad 2. So put on your jeans, your sneaks, and of course your black mock turtleneck, and learn why several open programs are so much cooler (and perhaps even more productive) than one.

Multitasking on the iPad 2

Apple introduced multitasking on its mobile operating system with version 4.2 of the iOS operating system in late 2010. It was practically inevitable that the feature would be included in the next-generation iPad the following year.

The mechanics of multitasking on an iPad 2 are fairly straightforward. Simply double-tap the iPad's "Home" button to see a list of recently used applications and select the one to which you'd like to switch.

The number of applications you'll see depends on the iPad's orientation at the moment -- in "portrait" mode, where the screen is vertical, it will fit six application icons on the Multitask Bar. In "landscape" mode, with the screen laid out horizontally, you'll see up to seven icons.

Many old-time Apple users have been taught to close out of applications when they're not in use -- it frees up system resources and is just the orderly thing to do. But for some good reasons why you'd want to use the multitasking feature, click to the next page.

Is it really multitasking?

Truth be told, Apple engaged in a bit of creative marketing in labeling its new iOS feature "multitasking." For most iPad owners, the difference is simply one of semantics, but for true geeks there's an important distinction here. Applications on the iPad are actually just "suspended" -- halted with their current information and settings. For the most part, they are not actually running in the background (some exceptions include audio programs and GPS). Instead, iOS rapidly starts them where they left off, without you having to go through the time and hassle of opening them from scratch.

When Should You Multitask? 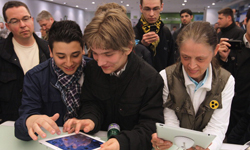 Shoppers try out the new Apple iPad 2 on the first day the tablet computer went on sale at a Gravis computer shop March 25, 2011 in Berlin, Germany.
Sean Gallup/Getty Images

Multitasking can be quite a time and energy saver. That's one of the reasons for the initial clamor from users when the iPad first came out, without the ability to multitask. It was something available on full-sized computers, and its lack consigned the iPad in the minds of many to being just a piece of visual and tactile candy. Now that it's available on Apple's tablet, the key is to adapt multitasking to the way you work (and play).

Multitasking lets you, for instance, copy and paste information from one program to another -- handy if you're composing an email and need to quote from material on the Web or in an iWork Pages document.

It lets you switch from one program to another without shutting the first one down and losing precious seconds to app shutdown/start-up operations. And as a result, it lets you pick up your work right where you left off before you switched to another task.

It's not uncommon -- especially if you work in a creative field -- to need three or four different programs (Web browser, word processor, image editor and more) to complete one project.

If you're the type that works better to music, on the iPad 2 you can run the music player in the background while you switch between productivity apps. Most applications are "suspended" when you switch to another program -- they are frozen right in the middle of whatever they were doing. Certain programs, however, like the music player, continue to truly "run" while in multitask mode because they're otherwise useless without providing you real-time data (for instance, musical output).

Is there anything a regular PC can do that the iPad 2 can't do? The device is undoubtedly sexy, but it isn't perfect. To find out some of the limits of multitasking with the iPad 2, click to the next page. 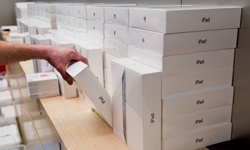 Boxes of the new Apple iPad 2 are stacked as it goes on sale in London, England.
Ian Gavan/Getty Images

The iPad 2 crams a massive amount of computing power into a very small space. Consider that it has not one, but two cameras, up to 64 gigabytes of storage, Wi-Fi, Bluetooth and 3G cellular wireless capability, a 1-gigahertz, dual-core processor (Apple's custom-made A5) and a high-definition display screen ... all in a wafer-thin (0.34 inches, or 8.64 millimeters) container with dimensions smaller than a standard size sheet of paper (9.5 inches tall by 7.31 inches wide, or 24.13 by 18.57 centimeters).

But it does have some limits, as posters to many a forum dedicated to Apple products have attested. When it comes to multitasking, the chief complaint seems to be the amount of on-board memory available to run several tasks at once.

For example, the highly popular game Angry Birds, with its addictive physics-based destruction of pig fortifications, can have trouble running simultaneously with other programs, according to some user reports [source: Caolo].

In some cases, the iPad 2 has even been crashed running just one resource-intensive application at a time, like the tablet version of Apple's GarageBand music-composing software.

Apple "only" equipped the iPad 2 with 512MB of random access memory (RAM) -- many reviewers of the device have said 1GB would have been more appropriate.

Lesson: don't be surprised if an app shuts itself down from time to time or requires a device (gasp) reboot. Typically it's not cause to panic, but rather a limitation (for now) of the hardware.

Just because you can multitask on the iPad 2, similar to the way you can on a laptop or desktop computer, should you? Will it actually help you to get more done, faster? For the lowdown on getting a productivity leg up while computing, click to the next page.

A Few Thoughts on Multitasking 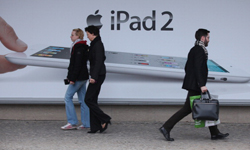 A shopper who had just bought the new Apple iPad 2 on the first day the tablet computer went on sale walks past an advertisement for the device in Berlin, Germany.
Sean Gallup/Getty Images

"The man who chases two rabbits catches neither." -- Confucius

If you're reading this, you probably know how debilitating it can be trying to work in an environment of emails constantly arriving, calls coming in and people interrupting you with their own problems. So is it really helping if you try to work on several of your own tasks "simultaneously?"

There's a raging debate as to whether people can actually "multitask," versus switching between multiple tasks rapidly. There's even a term for the latter -- "switchtasking."

In the book "The Myth of Multitasking: How "Doing It All" Gets Nothing Done," author Dave Crenshaw explains the difference between "background tasking," such as exercising or listening to music, and "switchtasking," which requires you to alternate focus among two or more jobs that require a greater degree of concentration. The problem with switchtasking, he writes, is that we lose time and progress in those transitions from one task to another [source: Trapani].

Crenshaw's work seems to suggest that perhaps you don't want to be switching among all those iPad apps in the first place -- unless you're using them to complete one specific task at a time.

The iPad 2 with the upgraded iOS 4 operating system offered quite a few improvements, including multitasking. But even better things are in store for those who wait, according to Apple and its supporters. To find out what those things are, click to the next page.

Hang on for iOS 5 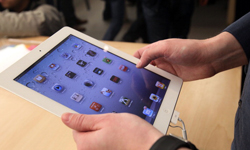 A customer tries out the new iPad 2 shortly after it went on sale at the Fifth Avenue Apple store in New York City.
Mario Tama/Getty Images

Is tapping that clunky old Home button to call up multitasking too exhausting for you? The next Apple mobile operating system, iOS 5, will allow you to gesture to bring up the multitasking bar -- swipe up with four or five fingers and it will appear; swipe left or right to slide off-screen applications into view and switch apps.

Scheduled to become available in the fall of 2011, iOS 5 promises to be a short attention span sufferer's and information junkie's delight: users' documents will be available to them on all their Apple devices, including the iPad, through "iCloud," Apple's remote storage and software delivery service; iMessage, an instant messaging service that will allow you to add IMing to fellow iOS users to your multitasking mix; and much more.

One of the biggest boons to iPad multitasking -- or distractions, depending on how you use it -- will be iOS 5's comprehensive integration of Twitter. Users will be able to tweet updates directly from the Camera, Photo, YouTube, Maps, and Contacts apps, and most likely more once third-party developers jump into the fray.

Perhaps best of all, Apple says making software upgrades with iOS 5 will be relatively painless. The frequency of software updates for computers these days can be annoying at best and a nightmare at its worst -- when "fixes" are buggy and conflict with your current set-up. For iOS users, up until now it's also meant having to plug your mobile device into a Mac or PC to connect with and sync to iTunes. With iOS 5, those updates will take place over the air, wirelessly, greatly reducing the hassle factor. Less time fumbling around with wires to keep your iPad current should equal more time to actually be productive on the tablet.

Is multitasking a panacea for the iPad's thimbleful of imperfections? Definitely not. But it is one of many features that make the device just a bit higher in functionality to match its well-conceived form.