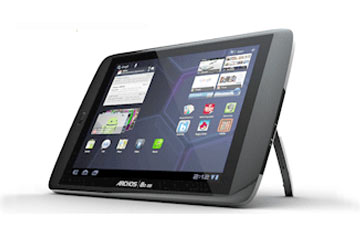 Archos' newest and fastest G9 tablets are slated for a fall 2011 release and will feature the Android Honeycomb 3.2 operating system and 16 to 250 GB of memory.
Image courtesy of Archos

Donuts, eclairs, frozen yogurt and honeycombs sound like a string of favorite things to sing along with the strudels and noodles of the "Sound of Music," but they're really favorites in the world of tablet operating systems, not musicals. With Donuts, Eclairs and Froyos (for frozen yogurt) nicknaming the Android 1.6 to 2.2 operating systems and Honeycombs creating a buzz in the 3.0 to 3.2 Android world, tech companies have been working to scale computing functions and graphics for the specific sizes of tablets. Android 2.1 and 2.2 work well in many devices, but the 3.2. Honeycomb OS is the first Android development specifically for tablet displays.

One company launching Honeycomb-powered tablets is Archos, a French consumer electronics firm known for its portable video and audio players. Archos has been around since 1988 and launched its first Internet tablets in 2008, with its Android tablets following in 2009 [source: Archos]. As of 2011, Archos offered 10 different tablets with its newest and fastest G9 Honeycomb tablets slated for fall 2011 release. Other tablet makers are ahead of Archos in releasing Android 3.0 devices, but few, if any, have done it as affordably.

Not only does Archos offer a lot of tablets, they're also some of the lowest priced, with CNET reviews declaring that they're "ridiculously affordable" compared to some of the big names in tablets like Apple and Motorola. Archos tablets also made CNET's lists of the five best budget, best 7-inch and best Android tablets in 2011 [source: Bell]. With prices ranging from about $99.99 for a 2.8-inch (7.11 cm) palm-sized tablet to an estimated $369 starting price for its upcoming 10.1-inch (25.65 cm) G9 tablet, Archos' Android line falls well below the lowest price point for high-end devices and even most lower-end offerings. (Its Archos 9 PC tablet offers a Windows OS instead of Android and comes in a bit higher price at about $499.99.)

Tablet sales were so strong after the launch of Apple's iPad in early 2010 that most of the big names in computing introduced their own versions. As of mid-2011, none have come close to the millions of iPad units Apple has sold, and one of the most touted tablets in the business, HP's TouchPad, was even discontinued weeks after its launch due to poor sales and lukewarm reviews [source: Gallagher]. Can the lower-priced but highly loaded Archos tablet range do better and have a longer run? Could it become a "favorite thing" for consumers?

Next we'll look at whether Archos is a sweet deal. 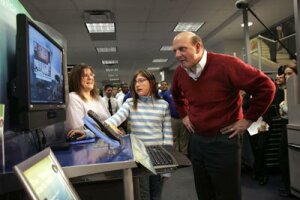