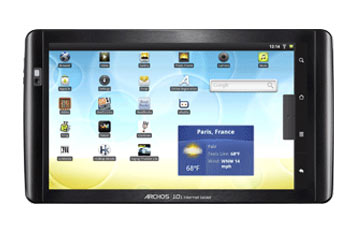 Some Archos tablets, including this 10.1-inch 101 model, have built-in stands for freestanding use.
Image courtesy of Archos

Getting the most out of a tablet device has a lot to do with how easily you can access the stuff you need and use. Applications allow users to customize what they do with phones, PDAs and tablets, and depending on who made the device and what kind of partnerships they have, you can get either tens or hundreds of thousands of apps -- or only a fraction of that. Owners of Archos tablets have plenty of options for loading them up, with access to the Archos AppsLib of about 38,000 apps; 35,000 of them free [source: Archos]

If you're looking for access to Google's Android Marketplace, however, as of yet Archos tablets can't access the full marketplace, though the upcoming G9 tablets will have it preinstalled. Some basic Google apps like maps are available for current and older models through the AppsLib, though, and many users report that there are some hacks for getting access to more Google offerings. Within the AppsLib, applications are divided by category and you'll find many popular games, apps supporting YouTube and Facebook, and options for radio and media play among others. And if you aren't an Archos tablet owner and want access to the Archos AppsLib, a download is available and it's adaptable depending on what Android device you own.

Archos offers a range of accessories for its tablets too, including stands, car mounts, protective cases and skins, and a selection of cables, adaptors and ports for input and output between devices. Some Archos tablets, including the 10.1-inch 101 model even have built-in stands for freestanding use. Other accessories include games, plugins and remotes. Two sources for finding out more about Archos apps and accessories are the English and French company fan Web sites, ArchosFans.com and ArchosLounge.net.

All-in-all, reviews of Archos tablets have been in the three out of five stars range, and there is some buzz about the Android for tablets 3.2 Honeycomb OS due in the September 2011 G9 release. Some, however, wonder how the new tablets will fare coming later than releases of Honeycomb-powered tablets by other manufacturers. Whether the new tablets will be a success is yet to be seen, but even the existing offerings appear to be reliable and impressive picks for basic and frequent tablet e-reading, multimedia streaming and browsing. With an iPad 3 on the 2012 horizon and a trail of failed HP TouchPads in their wake, Archos tablets are worth a look and feel, and are less of a tough tablet to swallow with their economic price point.

More talk of tablets, Androids and gadgets below.