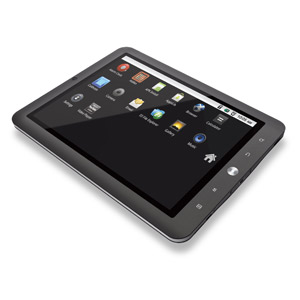 Coby’s new Kyros tablets attack the market from a unique angle and include uncommon products, such as this tablet with an 8-inch screen (most tablets have 7- or 10-inch screens).
Courtesy of Coby

If the consumer tech market were a prom dance, almost everyone would want the iPad to be their date. But in this economy, not everyone can wine and dine Apple's high-budget products, and that's why a legion of low-cost tablets has begun to crowd electronics shelves. Even in these recession-weary times, no tablet lover has to dance alone.

Enter the Kyros line of tablets, which was introduced by Coby in the first quarter of 2011. The Kyros collection features three different versions, all with varying specifications. Prices range from very low for the MID7024 ($179.99) to the still very affordable MID1024 ($299.99), both of which are far less than the most basic iPad 2, which sells for around $500.

Each model has similar capabilities, including Wi-Fi connectivity and more than a dozen integrated applications. There are some very basic apps, such as a calculator, calendar, clock and e-mail function, a browser for Web surfing and apps for playing both on- and offline music and videos. The Aldiko E-book app lets you download and read books, and you can locate and download other programs using AppsLib, a marketplace for Android-based tablets (which the Kyros models are).

These tablets come preloaded with Google's Android (OS) operating system 2.2, which was originally developed for smartphones. To be totally clear, this isn't a version of Android that comes with Google's stamp of approval. Instead, this OS is an open-source flavored Android that's molded to fit the relatively low-powered hardware found on Kyros models.

So when you unwrap a Kyros, you won't find many of the free Google apps that come on many smartphones or other mid- to high-end tablets. Forget about Gmail, Google Talk, Google Books, Google Market, Google Maps and other apps that many people take for granted these days.

But in spite of the absence of those features, there's still plenty to explore under the hood of Coby's tablets. On the next page, you'll see more details about the hardware powering these products. 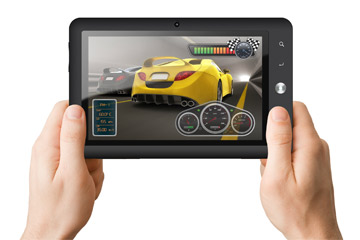 Like many tablets, these Coby models have built-in sensors that can sense their orientation in space, letting you move the tablets from side to side to control gaming action, among other functions.
Courtesy of Coby

Kryos tablets are among the most economical tablets available. Their specification sheets reflect this reality, with less robust hardware and overall computing power.

All three models have 1GHz processors (Samsung's Cortex A8 chip) and 4GB of internal memory, which is expandable to 32GB via the microSDHC flash card port. They include a mini-HDMI port (but no cable) that lets you display content, such as 1080p HD video, on an HDTV. You'll also find a front-facing camera, physical navigation buttons, a standard WiFi adapter, a microphone and built-in speakers. The rechargeable battery is of the lithium-polymer variety, which Coby says will net you around 10 hours of audio playback, or 4 to 6 hours of YouTube.

The biggest point of differentiation is the touch screen that comes with each model. The first number of each will clue you in to the size of its screen. Here's the breakdown:

Besides their varying screens, how do Coby tablets stack up (against each other and other tablets on the market) in terms of size and weight?

Each version also comes with a mini-USB 2.0 port. This port is useful for transferring data to and from the tablet, and with the included host adapter USB cable, you can plug in devices with full-size USB connectors, such as flash drives. You can connect a mouse or even a full-sized USB keyboard for times when you need to do a lot of typing, although a few keys (such as Function keys) don't play nicely with Android.

On paper, the 1GHz processor is similar, speed-wise, to the chip found in the original iPad. However, Apple's chip was customized for the iPad system as a whole, so it's unlikely that users can expect the same kind of snappy performance in the Coby tablets. And where Apple's chip was optimized to offer power-sipping performance to prolong the battery charge, Coby makes no such claims.

Coby's tablet features are pretty basic, but what about its accessories? Keep reading to find out what the Kyros tablets offer out of the box. 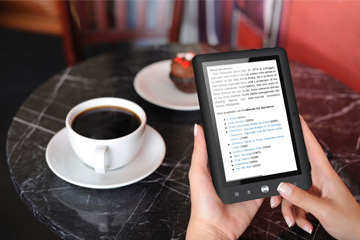 Coby tablets come with an e-book reader app that lets you download and read thousands of different books.
Courtesy of Coby

Because Coby's emphasis with the Kyros line is to deliver budget-friendly products, you won't find much in the way of extras in the box. Accessories include a carrying case, two USB cables, headphones and the obligatory power adapter.

You will also receive a plastic stylus to help you input commands. This is an important item to note, as it points (figuratively and literally) to specific design elements, especially with regard to the most inexpensive Kyros models.

Resistive screens are made up of two layers of conductive material separated by a gap. In order to register your command, you must press hard enough to close the gap and create a signal. Their mechanical function (and resulting possibility of failure), along with the need for user calibration and relatively thick screens, makes them less desirable than more dependable and responsive capacitive screens.

Although none of the Kyros tablets pretend to be powerhouse devices, they do offer mobile computing capabilities in a form factor that's smaller than a laptop. For anyone who wants to join the tablet party, these models offer some of the most inexpensive ways to get your tech groove on.