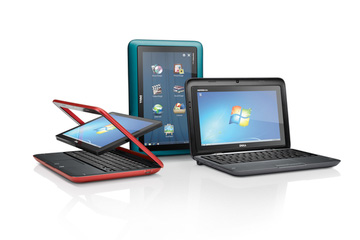 Another mobile option from Dell, the Inspiron Duo: a netbook in disguise. Here you can see it in its netbook and tablet forms, and the transformation in between.
Image courtesy of Dell Inc.

As is the case for most other mobile device on the market, third-party manufacturers have developed silicone wraps that protect the Streak's exterior from bumps and scratches. For users anticipating harsher encounters with dirt, drops and moisture, both Dell and Otterbox offer heavier-duty cases. Dell also took a note from the iPad's playbook in developing a cover/stand that wraps around the Streak, which protects the screen and allows the user to set the Streak on a table in a number of viewing positions [source: Dell].

Dell also offers a lithium-ion 1530 mAh backup battery, but its capacity -- only about half that of the main battery -- means it is truly an emergency stop-gap until the user can find an electrical outlet [sources: Dell]. Dell does offer an adapter that connects the Streak's 30-pin connector to a standard USB port, from which the device can charge and sync data.

One accessory that may prove extremely popular is the 16GB SDHC card that Dell sells to double the Streak's storage capacity. For users who aren't sure whether they need the added capacity -- and expense -- of the greater built-in memory found in other devices, this flexibility means that giving the Streak enough room for additional data is as simple as inserting the same kind of card used to store photos on a digital camera.

The Streak 7's middle-of-the-range size may narrow the field of consumers eager to pay $300 to $450 (U.S.) for it. Atlthough the Streak 5 fits into the upper end of the big-smartphone niche, the Streak 7 would barely fit in most users' pants pockets, and neither can make phone calls (unless you count Skype, Google Voice and similar phone apps). Likewise, users hoping to carry widescreen movies and large-print e-books with them would most likely prefer a larger screen.

There may be a middle ground of consumers, though, who would see the Streak 7's unique size as a benefit: those who need better portability than larger tablets and small laptops can offer but want a bigger display than even the largest smartphones provide. Dell may take on the larger tablets with the Inspiron Duo and the Streak 10 (if it becomes globally available), but for now it's staking its claim as a contender in the small-tablet niche.