How the HP Tablet Works 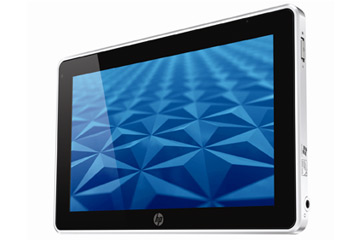 The tablet that launched a thousand impulse-purchase clicks. (Figuratively speaking. Reportedly, some 350,000 units were sold the first day of the fire sale.)
Photo courtesy of HP.

The Hewlett-Packard TouchPad tablet deftly illustrated that there's one sure way to become a giant-killer in the race to beat the Apple iPad: Have a fire sale. In August 2011, HP announced it would jettison its only tablet, just six weeks after the product became available. What happened next really got people's attention.

HP began selling its 16GB TouchPad for $99 and its 32GB model for $149, down from $399 and $500, respectively, and many online retailers followed suit [source: Paul, Kendrick]. The price drop was met with such high consumer demand that on Aug. 31, 2011, HP made a temporary concession: It would manufacture more tablets to meet unfulfilled demand before officially ending the program on Oct. 31, 2011 [source: Budgell].

So why kill the tablets in the first place? HP's move was intended to distance its commercial division from its stagnant consumer electronics division, and there was mounting speculation of an impending sale to a rival, such as Samsung [source: Reardon]. But as consumers clambered to buy discounted TouchPads, HP's consumer electronics division experienced a reversal of fortune. One of its executives revealed to Reuters that HP may create a standalone company to develop and manufacture tablets and PCs, rather than get out of the business altogether [source: Jones, Gupta].

If you didn't dash online to buy a deeply discounted TouchPad within the first few days of its sale, you may still be able to buy one. A few online retailers didn't initially drop their prices. Consequently, they didn't sell out of TouchPads during the initial rush and will likely reduce inventory by offering significant discounts. Plus, there are brick-and-mortar retailers that may still have HP tablets on their shelves [source: Usigan]. For updates about the availability of HP's late 2011 manufacture of a limited amount of TouchPads, consumers could sign up for updates at HP.com.

According to HP, TouchPads sold at the $99 or $149 rate cannot be returned or exchanged [source: Budgell]. However, HP said they would continue to offer a one-year manufacturer's limited warranty on the sale-price tablets.

Wondering whether the HP tablet is worth even one-fourth its original price? We'll explore its features, specs and future on the next page.

The TouchPad also features a 1GHz dual-core processor and webOS 3.0 operating system. HP acquired the operating system when it purchased Palm for $1.2 billion in 2010. The operating system was initially developed by Palm during the mid-1990s for smartphones and is rumored to have a promising future in tablet applications -- one that could rival Apple's iOS and Google's Android [source: Gruman, Hewlett-Packard].

The TouchPad has several preinstalled apps, including Bing Maps, QuickOffice, Facebook and YouTube. It also has apps to create a contact list, cull photos and videos, add memos and organize music [source: Arthur]. Additional free or paid apps can be downloaded from the HP App Catalog, an online app store. However, critics contend that the HP App Catalog offers few options -- certainly not the hundreds of thousands of apps available in the Android Market or Apple's App Store.

The TouchPad has a 1.3-megapixel camera for video and still photography, and it offers videoconferencing. Without a second, rear-facing camera, the TouchPad comes up short when compared to competitors like the Samsung Galaxy [source: Stern]. One thing that sets the TouchPad apart is its a wireless charger, a device on which the tablet sits during re-juicing -- which it'll need to do after some five to eight hours of use. The charger can lie flat or double as a stand, which can turn the tablet into a desk or bedside clock.

TouchPad's proponents like its ability to handle Adobe Flash apps and widgets, as well as its intuitive printing capabilities, which allow users to network wirelessly with HP peripherals to print documents and images.

Whether there will be a next-generation TouchPad is still unclear. For the perpetually congested tablet market, however, the takeaway is this: Too-high prices are a barrier between tablets' purveyors and sales numbers.