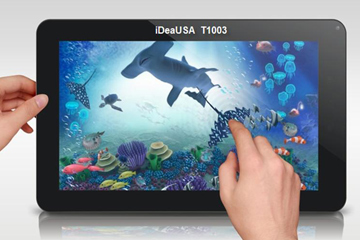 iDea USA courts consumers who want a tablet experience on a budget. For well under $200, you can have a model like this one with a 10-inch display.
Courtesy iDea USA

The iDea USA tablets are the brainchild of Stephen Perl, director of iDea USA, which is based in Los Angeles, Calif. Perl says that the tablets are designed in the United States and built in China. Employees in the U.S. also do quality control and preload a series of popular apps.

He adds that iDea tablets aren't meant to compete with iPads or other high-powered tablets. Rather, they're designed for consumers who want a tablet with a full range of capabilities that doesn't empty their wallets. Perl says students, small businesses and cost-conscious buyers make up the bulk of iDea tablet buyers.

Each tablet runs a version of Google's Android OS (operating system), including Android 4.0, which is also called Ice Cream Sandwich. Perl notes that iDea USA chose Android because it's an open and universal platform. What's more, he says, the version of Android on these tablets is actually more universal and less restrictive than versions you might find on tablets from, for example, large carriers in the United States.

The reason for this is simple: Large carriers, particularly those that sell smartphones or other products, encounter conflicts of interest if they unleash Android in all its universal glory. In fact, he says, doing so would potentially cannibalize other parts of their business model.

With iDea USA tablets, however, you get a truly universal version of Android. For anyone who wants to have full control of their Android-based product, this is one way to get your wish.