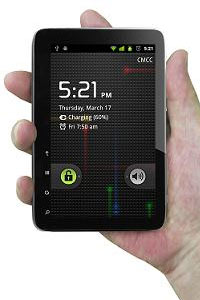 The Latte ICE Smart is not too much larger than most smartphones.
©Latte

The 5-inch (12.7-centimeter) Latte ICE Smart advertises the following features: 1080p video support, TV mirroring output via HDMI, a media player capable of supporting many different video formats and access to the Android marketplace. Those are all features supported by most Android devices, but there are some drawbacks to note. There are some Android apps that won't work on the Latte ICE, including games which often require a better processor, graphics processor or more advanced sensor suite for detecting motion. The resistive screen, which only supports two-finger touch, will also limit the player's functionality.

Because it doesn't support 802.11n WiFi, the fastest wireless speed the Latte ICE can manage is 54 megabits per second. Many other mobile devices will better serve as portable Internet browsers, but the ICE Smart is perfectly capable of serving as an MP3 player, mobile video player or e-reader.

Thanks to its 7-inch (17.8-centimeter) form factor, the Latte iMuz can fulfill the role of a tablet more efficiently than the smaller ICE. It supports faster 802.11n WiFi, though only with 150Mbps single-stream technology (802.11n can be broadcast on up to three streams for up to 450Mbps). The 1.2GHz processor and Mali 400 GPU are also much faster hardware, which is important for smoothly running the tablet-focused Android 4.0 Ice Cream Sandwich OS. That hardware also makes the Latte iMuz more capable of running apps and graphically demanding games.

The iMuz's capacitive screen supports five-finger multitouch and the same video and HDMI mirroring capabilities of the smaller tablet. It also adds the option to video chat via services such as Skype, thanks to its front-facing cam. And there are both advantages and drawbacks to that larger size: The screen will offer more real estate for reading e-books, watching videos and browsing the Web. But it has a lower resolution than most other 7-inch (17.8-centimeter) tablets, which run at 1024 by 600 or higher. That means text won't be as crisp and individual pixels will be more visible.

Neither of Latte's tablets do anything to differentiate themselves from the rest of the market: You can find the same features available in any number of devices. But they are cheap: The iMuz costs $170 and the ICE Smart costs only $130. Is that enough to make either Latte tablet a smart buy over the competition?